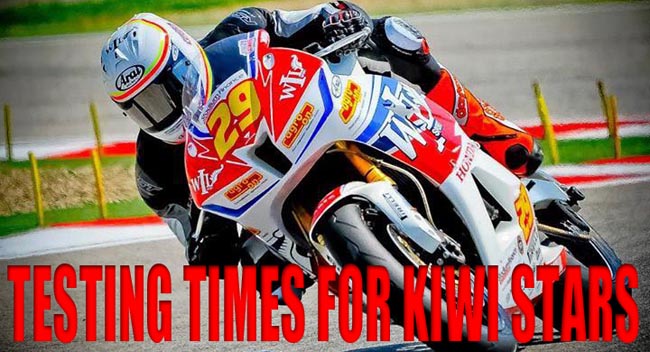 After three rounds of the World Superbike Championship, both Kiwis Jake Lewis and Connor London have been testing out their new PSI leathers, not that that was something they’d planned to be doing.

Round two in Assen was particularly challenging in the wet with Lewis crashing out in spectacular fashion in the Superstock 600 race, while his WILSport Honda team-mate Kevin Manfredi finished second.

After fighting in the top 15 all weekend and then finishing in a solid 16th place at Imola, Rangiora’s Lewis is firmly in the hunt for higher honours in the rounds to come.

Auckland’s London was also unlucky to crash in practice in wet conditions, but came back strongly in the race to finish a credible seventh at Assen, which was a fantastic result. Another big crash in practice at Imola left the bike a little worse for wear but London did well to bring it home in 12th and remains in the top 10 of the EJC Championship.

Fellow WIL Sport rider Augusto Fernandez leads the EJC Championship after scoring consecutive wins at Assen and Imola and is confidently looking forward to the fourth round at Donington in the UK this weekend.

The WIL Sport wildcard Jianwen Zhu from China, who will unfortunately miss the next few rounds, has done well securing points in two of the races to date.

Meanwhile, Auckland’s Avalon Biddle is racing this weekend at Vallelunga and a strong performance is expected from ‘Av Gas’ with many of the previous technical issues sorted with the bike.

In between racing there has been dinner with Superbike rider Jeremy Guarnoni of France and meeting up with Kenan Sofouglu, who spoke to the EJC riders. Plenty of training at the gym and on their bikes is keeping them in shape and with races ahead in the UK, Italy, Portugal, Spain and France there is still plenty to keep them focused on their pathway.