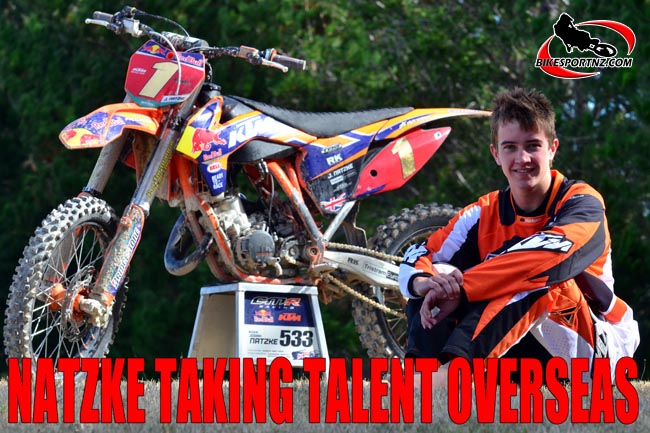 Waikato’s Josiah Natzke is ready to spread his wings.

The 15-year-old Hamilton youth made New Zealand motocross history this season when he became the youngest rider ever to win the senior national 125cc title and now he is setting his sights on Europe and the rest of the world too.

Natzke is making plans to tackle the annual World Junior Motocross Championships, this season set for the Bastogne in Belgium on August 10, and he has received massive support from KTM in New Zealand and Australia in this world title bid.

KTM will supply Natzke with a new KTM125 motorcycle for him to auction off to raise funds for the European campaign. The bike will be in the style of a “Natzke CMR Red Bull Race Team replica”, the same make and model as he rode to victory at Taupo in March, with a signed Natzke race shirt and a full training day with Josiah Natzke also to be offered to the auction winner.

The bike will be auctioned on Trade Me, starting next month.

His parents, Janine and Chris Natzke, said they had received “awesome assistance” from Patrick Stafford, from KTM in New Zealand, and Jeff Leisk, from KTM in Australia, as well as from Kiwi former world motocross champion Ben Townley.

“KTM will provide bikes and support in Bastogne and all that Josiah will have to do is turn up and ride,” said Chris Natzke.

The teenage Kiwi star will head across to Europe at the beginning of July, giving himself plenty of time get acclimatised. He will warm up for the Junior World Championships by racing at two European Motocross Championship (EMX) events, in the Czech Republic and in Belgium in July and August.

“The aim is to make a really good impression in Europe and, hopefully, it will lead to greater things, potentially a position on a Grand Prix team in the very near future, maybe next year or the year after.”

Josiah Natzke has previous raced overseas, in Australia and the United States, but this will be his first trip to Europe.

“I’ve been doing my homework on the race scene,” said Josiah Natzke.

“I’ve been checking out videos on You Tube of the venues and the riders who I might come up against. I guess I’m not going over there to come second; I’m going there to win. But I’ll simply do my best and see what happens.

“I don’t yet have any plans for racing in Europe next year, but if something popped up and the offer was there, why wouldn’t I take it?”

Natzke said the auction was crucial to his fundraising plans for the trip, but that any other contributions would be gratefully appreciated.