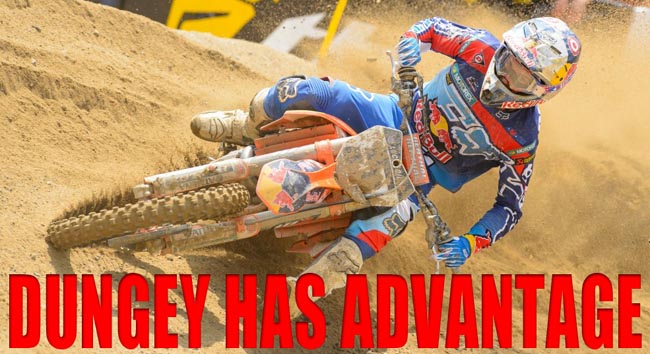 The Glen Helen National made its highly anticipated return to the Lucas Oil Pro Motocross circuit since 2009, when Red Bull KTM’s Dungey captured the 250 class win en route to claiming the 250 class championship the same year. Dungey, also a two-time 450 class champion, made a statement at the season opener as he topped the highly competitive field with 3-1 moto scores.

It was Riverside, California’s Josh Grant who kicked off the season opener in a big way as the Toyota/JGRMX Yamaha rider captured the $500 holeshot and led Moto 1 from start to finish. Grant’s newest JGRMX teammate, Phil Nicoletti, joined the front-runner early on in Moto 1 before Roczen made the move for second place. Roczen made a valiant charge toward Grant’s lead at the end, where he finished less than one second behind the JGRMX rider for second place, while Dungey came in third.

The Red Bull KTM duo of Dungey and Roczen were neck-and-neck heading into the second moto and things only became more exciting as the gate dropped and the battle ensued. Roczen got off to a great start and Dungey filed in close behind, but as the race wore on, the veteran Dungey closed the gap on the leader. With only a few corners to go, Dungey made the pass on Roczen for the lead and held on to capture the Moto 2 win.

Dungey’s 3-1 moto scores were enough to secure his first overall win at Glen Helen in the 450 Class, where he now leads the early points chase heading into the second round next weekend.

“It was really just a game of cat and mouse the whole time,” Dungey said. “I felt like the win was there early on, but I just needed to make that pass happen [on Roczen]. It was good to go 1-2 with a team-mate and it was a good day for KTM.”

While Roczen led 15 of the 16 laps in Moto 2, the former world champion finished second place in the moto and second overall for the day.

“I’m happy about my riding today,” Roczen said. “I want to take it week by week and just keep making progress. We’re going to go to Sacramento 100 percent focused and to just ride as good as we can.”

Team Honda Muscle Milk’s Trey Canard carried himself to a podium finish in the second moto, where a 7-3 score gave him third overall for the day.

“One thing that’s for sure about this series is that it’s long,” Canard said. The biggest thing you can do is just focus on yourself and try to go out there and win the race. My goal is to get maximum points each week and where the cards fall, they will.”

Australia’s Bret Metcalfe made his first appearance aboard the Monster Energy Kawasaki squad on Saturday, where he will fill in for the injured 2013 450 Class Champion Ryan Villopoto this season. Metcalfe, who is the reigning Canadian Motocross Champion, proved his merit by claiming fourth overall for the day, just ahead of Grant, who ran into issues in Moto 2 that dropped him back to 15th. Grant’s 1-15 score was good enough to land fifth overall in front of his hometown crowd.

In the 250 Class, it was a big day for the Yamalube/Star Racing/Yamaha team, who saw two of the three podium finishes in the division. In his sophomore year of Lucas Oil Pro Motocross competition, Millville, Minnesota’s Jeremy Martin secured his first career victory with a 1-1 sweep for the day.

Martin had an exceptional day all around, as he captured the $500 holeshot award in both 250 class motos. From there, Martin accomplished an impressive feat as the 21-year-old led every lap of 250 class racing across both motos at the opening round.

Martin was joined atop the podium by his Yamalube/Star Racing/Yamaha teammate Cooper Webb, of Newport, North Carolina. Like Martin, Webb put forth a consistent effort, where he finished with a pair of second places to claim the runner-up position for the day.

While Troy Lee Designs/Lucas Oil/Honda’s Cole Seely didn’t get the best starts, the southern California native quickly put himself into the top five in both motos. Seely battled with Webb in the first moto, where the duo flip-flopped for the second place position. Rockstar Energy KTM’s Jason Anderson interjected himself into the mix, where he finished third in the first moto. In the end, Seely finished the day with third overall after scoring a consistent showing of 4-4.

Jeremy Martin heads into the second round as the points leader in the 250 class for the first time in his professional motocross career.

Round two of the Lucas Oil Pro Motocross Championship heads to Sacramento, California for the GoPro Hangtown Motocross Classic on Saturday, May 31.