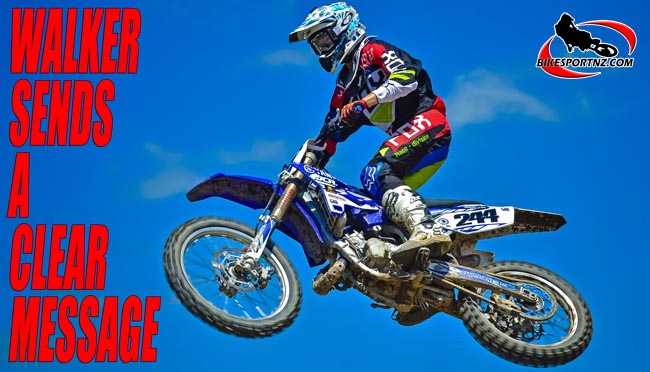 With five wins from five starts, Nelson’s Reece Walker certainly sent a clear message to his rivals at the weekend.

The Yamaha ace was simply untouchable as he rocketed to victory in the 12-14 years’ 125cc class at the in the 2014 New Zealand Junior Motocross Championships at Waipuna Station, Ikamatua, Westland, over the Anzac weekend. 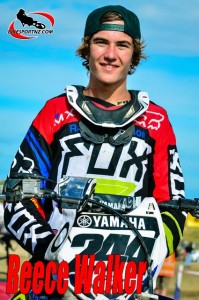 Poor weather in the lead-up to the weekend forced organisers to shave back the programme from seven races per class to just five over the weekend, but fine weather blessed riders for much of the racing and the riders seemed to have no problems finding traction on the farmland course.

But the young man who found the most traction was Walker, the Nelson Boys’ College year 10 student finishing the annual championships a massive 17 points clear of his nearest rival in the class, Te Puke’s Tyler Steiner (KTM), with another Yamaha star, Masterton’s Camden Butler, taking third step on the podium, 10 points further back.

Walker was consistently 1-2 seconds a lap quicker than his rivals and so, despite having bad starts for most of the weekend and crashing several times, he was still the runaway winner each time.

“I mucked up the first race of the weekend actually when I accidentally knocked my gear-shift lever into third gear on the start line,” said Walker.

“The bike bogged out of the start gate and I was in about last position through turn one. I caught up to the leaders but then crashed. Luckily I managed to get up and get going again and eventually took the win anyway.

“I had some good advice from (former Grand Prix star and Altherm JCR Yamaha Racing team manager) Josh Coppins. He told me to just to relax and just keep my momentum going … to treat the racing like it was just another practice day. That seemed to work for me.

“It was pretty hard work because the track was very technical, but I liked it a lot.

“Winning the national title is the biggest success of my career so far. I have had a lot of bad luck at the nationals over the years, but it all came together for me this year.”

Walker will dip his toes into senior competition at these events but says he will still remain a junior competitor for the next two seasons and must surely rate among the favourites to win national titles again in 2015 and 2016 as well.