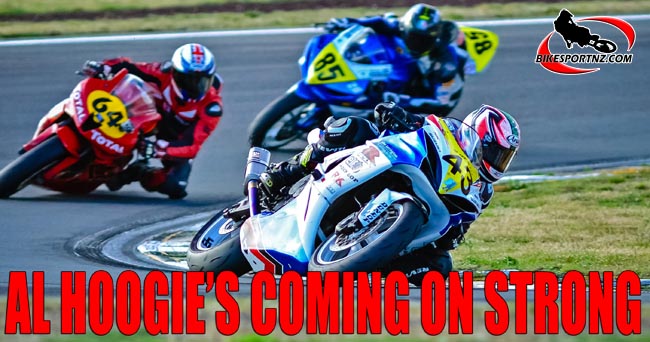 Suzuki has all the bases covered as riders of the distinctive blue and white bikes snapped up the TT titles in both the two main classes at the penultimate round of the New Zealand Superbike Championships at Taupo at the weekend.

Taupo’s Scott Moir (Suzuki GSX-R1000) won the TT title in the 1000cc superbikes class and Christchurch’s Alastair Hoogenboezem (Suzuki GSX-R600) claimed the TT crown in the 600cc supersport class as the two men also strengthened their claims for a podium finish to the season.

And while Suzuki were proud to trumpet the arrival of these new heroes, it was also pleased to note that two more Suzuki riders, Christchurch pair Dennis Charlett and John Ross, also rode solidly at Taupo at the weekend to maintain their respective leads in the superbike and 600cc supersport championships proper.

Charlett (Suzuki GSX-R1000) finished fifth and fourth at the weekend – the programme reduced to just two races for the superbike riders because of a major oil spill on the track – but that was still enough for him to extend his championship lead from 20 points to 24 over his nearest rival, Hamilton’s Nick Cole.

Moir’s 2-1 results at the weekend saw him leap up from fourth to third in the standings, 23 points behind Cole, and a podium finish for Moir this season seems a distinct possibility as the series heads to Manfeild for the final round next weekend

Ross (Suzuki GSX-R600) managed 2-6-2 in his three Supersport races and, although his main rival for the title, Manukau’s Toby Summers, did gain 10 points on him at the weekend, Ross still enjoys a very healthy 28-point advantage as they head to Manfeild.

The surprise package at the weekend was 21-year-old apprentice builder Hoogenboezem as he celebrated a career breakthrough and thrust himself into contention for the No.2 spot in this class, or possibly even the outright win.

Hoogenboezem was the best-performed rider in the class at the weekend, finishing 4-1-1, collecting the TT title and climbing to within just nine points of catching Summers.

“I had never won a 600cc race before at national championship level,” exclaimed Hoogenboezem afterwards. “To come here and get two wins, plus win the TT title is pretty exciting stuff.

“I guess it has been a breakthrough moment for me. I knew I had the pace to win but I finally managed to string it all together at Taupo.

“Second place in the championship is now within reach. I’m still nine points behind (Toby Summers) but anything can happen.

“I have previously won the national 125GP title, in 2010, but this is a way bigger deal and I have been riding at near lap record pace all season. I’m looking forward to Manfeild.”

Both Walker-Holt and Fitzgerald also lead their respective classes in the chase for the championship overall.