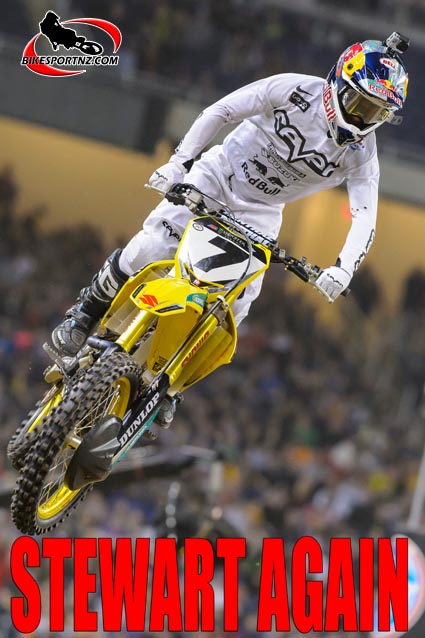 Suzuki’s Mike Alessi captured the holeshot in the 450SX class main event. Trailing Alessi through turn one was Kawasaki’s Ryan Villopoto and Stewart in second and third respectively.

Villopoto quickly passed Alessi and held onto the lead until Lap 10 when Stewart made a pass for the lead in the corner before the finish line. Stewart rode to his fifth win of the season and leads the 450SX Class with most wins.

“This is a special night for me,” said Stewart. “This year I have been having a lot of fun winning races. Tonight was a great race for me; I was able to make the pass and ride to my 50th win. That is huge for me. I never thought I would win 50 of these races.”

Villopoto finished second and has eight podium finishes this season.

“It’s all about the big picture and the championship for me,” said Villopoto. “I can’t afford to make any big mistakes. I was able to get a good start and put in some good laps early on.”

Honda’s Justin Barcia earned his third podium of the season with a third-place finish.

Davalos jumped out to an early lead in the Eastern Regional 250SX Class Main Event to win the holeshot. On his back wheel, Yamaha’s Alex Martin and Honda’s Justin Bogle followed in second and third respectively. On lap three, Bogle moved into third as JAB Motorsports’ Matt Lemoine secured third place.

Lemoine crashed on Lap 5 and gave up his podium position, allowing  Honda’s Matt Bisceglia to take over third place. Kawasaki’s Blake Baggett used a pass on lap seven to secure the number-three position.

“This was a tough race tonight,” said Davalos. “Again, the start was key, and I was able to get the early lead and hold on. I want to enjoy this win and go back and keep working hard.

Bogle made a late-race charge on Davalos, but a few mistakes allowed Davalos to score his first win in St. Louis. Bogle finished second and Baggett finished third.

“I made some passes and moved into second place but then made a few mistakes,” said Bogle.