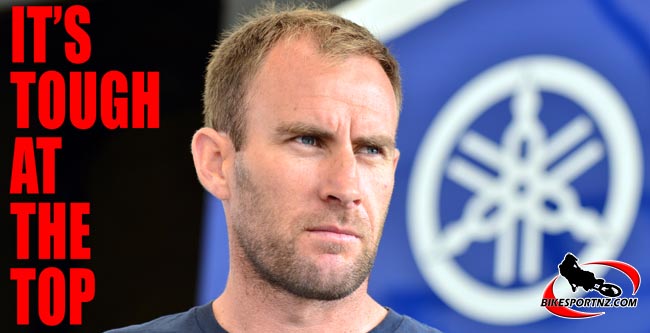 Motueka’s Josh Coppins is used to finding himself in difficult situations … and finding a way out of them too.

It has certainly been a difficult season for the Altherm JCR Yamaha Racing Team that he manages, although the former motocross world No.2 has still been able to guide three of his riders into podium positions as they head to Taupo this weekend for the fourth and final round of the New Zealand Motocross Championships.

The wisdom and experience of former Grand Prix racer Coppins has paid huge dividends for the team as they have had to find a way of dealing with a myriad of set-backs and it is a testament to his resolve and mental strength that the team holds prime spots in all three classes.

MacKenzie (Yamaha YZ450F) is again in the runner-up spot as the riders head to the Bay of Plenty for this season’s finale on Saturday, 37 points behind defending champion Cooper, and he knows he’ll need a brilliant day at the Taupo track if he is to snatch the crown.

In the 125cc championship class, a third Altherm JCR Yamaha Racing Team rider is ideally placed to cement a podium finish this season – Te Puke’s Logan Blackburn one of the fastest men on the track but hounded by bad luck through the early part of his campaign.

An electrical problem and then a huge crash while leading another race cost Blackburn (Yamaha YZ125) dearly at round two of the series in Tokoroa and he sits third overall in the championship, albeit just 11 points behind second-ranked Atiamuri rider Hadleigh Knight (CMR Red Bull KTM).

“We (at Yamaha) won two championships last year, so it’s difficult to handle us not being on top at the moment,” said Coppins.

“We really want to win some races at Taupo on Saturday and try to end our season on a high. Then I will be working on the structure of the team to put improvements in place for next season.”

Following this weekend’s racing, the Altherm JCR Yamaha Racing Team will look ahead to competing at one of the South Island’s biggest stand-alone motocross events, the annual Michael Godfrey Memorial MX, near Christchurch in June.