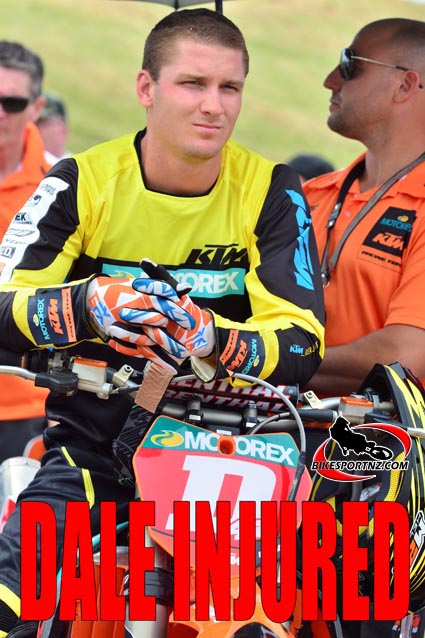 An unfortunate practice accident has left KTM Motocross Racing Team rider Ford Dale devastated to miss the end of the New Zealand Motocross Championships and the start of this year’s Monster Energy Australian MX Nationals which kick off next weekend (March 30).

On the back end of a successful build-up to this year’s Australian motocross nationals, Dale was emerging as a genuine title prospect after tough races in New Zealand, and was practising last weekend in Caloundra when the accident occurred.

Dale crashed heavily over a jump suffering facial lacerations and a broken left arm which is likely to keep him out of at least the first four rounds of the motocross championship.

Once the threat of infection has diminished, the Queenslander hopes to go under the knife next week to have the break plated.

The popular former Australian MX2 champ, who spent much of last year sidelined with a knee injury, is justifiably shattered, but is trying to keep positive.

The KTM Motocross Racing Team has elected not to source a fill-in rider for Dale’s KTM 450 SX-F during his absence, but will instead direct all its resources solely behind the campaign of Kirk Gibbs, who finished fifth in last year’s Australian MX1 championship at his first attempt.

“Ford was 27 minutes into a 30-minute moto when he hit a puddle that he’d been riding through, and must have hit it just millimetres different and the tyre slipped and it threw his weight forward as he went off the jump,” said Twyerould.

“He went over the handlebars and landed on all fours and on his face which he cut up quite badly. He broke his radius above the plate that was already in there.

“It was a big impact, and the bone almost broke the skin. He has a lot of lacerations so there’s a worry about infection for now, but he’s hoping to have surgery next Thursday to remove the existing plate and replace that with a new one.

“He’ll be out of action for a minimum of eight weeks which means he’ll miss the start of the National season and probably come in at Wanneroo, but we’ll assess at that point whether it’s worth doing that or just making a plan to bring him back strong for the final five rounds. The nice thing is that there are a few triple moto rounds in there to provide good point-scoring opportunities, so he can go in there with a nothing-to-lose attitude and go for round wins.

“For all of us in the team its devastating as it is for him, and in his lead up he was riding very well. We’d just finished testing and his bike was very close to spot on, so we’re very disappointed for him. We’re not going to put anyone else on his bike, we’ll just give Kirk our 100% support and give him the best chance to perform in the nationals.

“Ford was, like all riders, worried how the team would react, but everyone at KTM, from Jeff Leisk down, understands it’s a dangerous sport and you get hurt. We do everything in our power to minimise the risk but it happens, so we have to take it on the chin and do our best to be ready for when he’s fit and strong again.

“We’ll go to Taupo this weekend for the final of the NZ champs with Gibbsy and do our best. Kirk’s really on target for the start of the Aussies. He’s done some more suspension work with Danny and is extremely happy with his bike.

“I think he’s peaking at exactly the right time and is ready to go into round one of the (Aussie) nationals looking very, very solid.”

Ford Dale commented: “Physically I’m still a little sore, but I’m not doing much to aggravate it. Mentally though, I’m gutted. I’ve been working my butt off and everything has been going to plan, but just a little mistake means I’m out of the first few rounds of the motocross championships which is a massive blow because it was my goal to win this year.

“It’s tough and I guess I’ll be moping around a bit for a couple of weeks but it could have been a lot worse and in fact I look a lot worse than I feel.

“But as soon as I’m ready I’ll come out swinging. It’s a negative and it does suck but the team has been very compassionate towards me because they know how much I wanted it.”