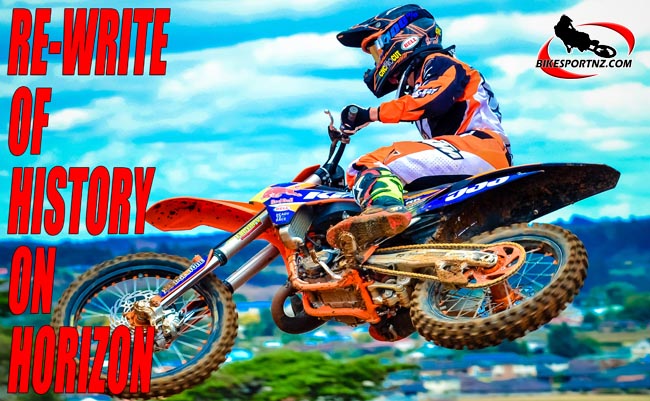 New Zealand motocross history could be re-written before the end of this month.

Not since the year 2000 has a teenager, fresh out of the junior ranks, gone on to dominate the senior ranks in just his debut year, but it looks like happening again this season with CMR Red Bull KTM Team rider Josiah Natzke.

Masterton’s Luke Burkhart was just 16 years old when he beat a fellow fresh graduate from the junior ranks, Taupo’s Ben Townley, to the national 125cc title in the year 2000.

Hamilton rider Josiah Natzke is still just 15 years old and on the verge of clinching the 2014 125cc senior New Zealand title, a mission he is expected to complete at the fourth and final round of this season’s New Zealand Motocross Championships at Taupo in less than two weeks’ time.

Natzke raced to a hat-trick of wins in the 125cc class at Pukekohe’s round three of the series on Sunday, extending to 35 points his buffer over his nearest challenger, fellow CMR Red Bull KTM rider Hadleigh Knight, of Atiamuri.

With 25 points on offer for each race win and only three races remaining for each class – at the final round in Taupo on March 22 – it means Natzke has an entire race up his sleeve.

“I was able to sprint away at the start of all three races and that was it really. I had been working on my starts all week leading up to the Pukekohe event and that obviously paid off,” he said.

“I knew that if I could get the holeshot I would be away and I could hold off the challengers.

“I still had to respect the track, though, and I had to be patient and not push too hard in some places.”

At age 15, Natzke is still entitled to race in the junior ranks but he declared that he was fully a senior competitor now and wouldn’t be going back.

Sensational senior debut performances like Natzke’s are a rare thing … it has perhaps happened on only two other occasions in New Zealand – when Hamilton rider Darryll King leapt out of the junior ranks to win the 125cc title in his debut senior campaign in 1986, and then when his younger brother Shayne King repeated the feat, and kept the title in the family, when he won the national 125cc crown as a ‘freshman’ in 1987.

Dargaville’s Dobbyn finished 2-2-3 in the MX2 (250cc) class and he remains second in the championships standings, behind Mangakino Husqvarna rider Kayne Lamont, while Takaka’s Harwood managed 4-6-6 results in the same category on Sunday and he is sixth in the rankings.