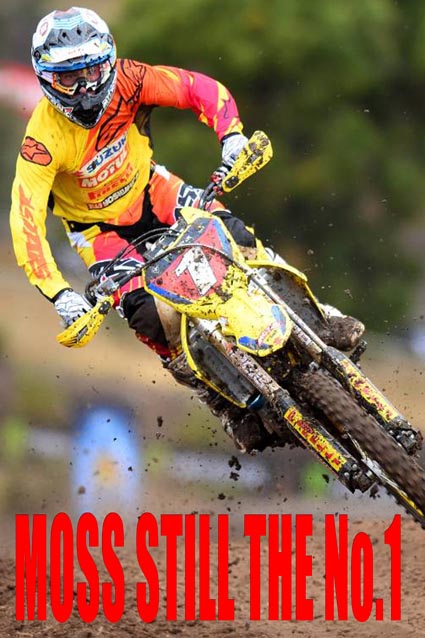 Kiwi riders Rhys Carter and Brad Groombridge featured among the front-runners but few had an answer to reigning MX1 class number-1 plate holder Matt Moss at the opening round of Australia’s 2014 Monster Energy MX Nationals and Broadford, near Medlbourne, on Sunday.

After rain fell steadily during practice and qualifying in the morning, the opening MX1 moto was greeted by sunshine beautiful sunshine.

A huge crowd gathered around the circuit to witness some enthralling early action when Jake Moss (NPS Monster Energy Kawasaki) got one up on his brother by taking the holeshot and getting to an early lead.

Matt was hot on his trail though, and the early laps saw a tough battle for family – and MX1 racing supremacy.

However the family script was torn apart four laps into the opening race, when Jake dropped his bike coming down one of Broadford’s steep hills, leaving Matt nowhere to go but straight into him.

Fortunately both riders got to their feet and while Jake was out of the race, Matt re-entered in third spot over all.  Monea and Mosig shot into first and second respectively – a position that Monea held for the rest of the race.

In the second race in the MX1 class, the racing intensified as both Gibbs and Jake Moss laid equal claims to the holeshot around the first corner.

It was short-lived however as Matt Moss stormed into the lead with a cunning passing move of both rivals on the second turn, leading the way ahead of Jake Moss, Gibbs, Monea, MacKenzie and Mosig.

At the end of the opening lap, a mechanical issue saw Mackenzie head to the pit area before returning to the track and finishing in 12th for the race.

The rest of the race remained status quo with Matt Moss claiming the win from his brother Jake, with Gibbs, Monea and Mosig rounding out the top-five.

The third moto of the day in the MX1 class looked to be heading in a familiar direction when Matt Moss stormed into the lead and took the holeshot.

However, half-way through the opening lap a slight mishap allowed Jake Moss and Monea to slide pass and he was unable to catch up to them in the next 20 minutes of racing.

Jake Moss went on to take the race win, and with his second and first in the final two races, was left to rue the opening race mishap – leaving him in seventh position overall for the round.

Monea’s second place in the final moto was enough to give him second overall on the day, while Moss finished in third to take the outright honours.

Mackenzie, Gibbs, Carter (Team Motul Suzuki) and Mosig rounded out the top-seven riders in the final race of the class.

It wasn’t all good news for the Kiwis as New Zealand MX1 champion Cody Cooper (Penrite Honda, pictured below) crashed out during the practice session and suffered a fractured eye socket and broken cheek bone. He will now most likely miss round two.

For a full list of class results, go HERE