Slow but steady wins the race … that was the cunning plan of Canterbury motorcycle ace Dennis Charlett at the weekend.

But in a sport when even going slow can mean racing at speeds in excess of 200kmph, it was never going to be a weekend without risk for the multi-time former national road-race champion.

The Christchurch Suzuki rider arrived at Manfeild for the fourth and final ‘double-header’ round of the New Zealand Superbike Championships with his main rival, Hamilton’s Nick Cole (Kawasaki ZX-10R), sidelined following an assault in a restaurant in Taupo the previous weekend, giving him nearly two race wins up his sleeve over the next best rider, Taupo’s Scott Moir (Suzuki GSX-R 1000).

With only five superbike races on the three-day programme, Charlett knew that a sensible approach should allow him to clinch his first national superbike crown.

And so it proved, with Charlett “cruising” to seventh, eighth and sixth placings on Friday and Saturday, enough to wrap up the premier class for 2014.

In the final race on Sunday, he was able to turn up the heat again and he led for most of the 10-lap race, only to be passed for the win right at the end by visiting Australian Linden Magee (BMW S1000RR).

Magee had also won the third race of the weekend, his 9-7-1-5-1 score-line over the three days elevating him from sixth position after round three to finish the championships in the No.2 spot.

With six or seven riders battling for the lead throughout the weekend, this was a fitting finale to this highly-competitive season, one that astonishingly featured seven different race winners in the superbike class.

One of those was young Aucklander Jaden Hassan (Suzuki GSX-R1000), a feat that was all the more remarkable because this was his debut season on a superbike.

“It was a really difficult weekend for me,” said Charlett afterwards. “Most people will probably under-rate how difficult it is to race at this level with a championship win constantly in the back of your mind. I could feel every bump on the track and was riding overly-cautious because I was aware that any little mistake or a tangle with another rider could spell disaster. Racing accidents happen so easily, and so quickly, and the first corner was madness.”

Charlett was national 125cc champion in 1999 and had previously also won the 600cc class on three separate occasions, but the superbike title is the jewel in his crown.

“I go into semi-retirement now,” said the 45-year-old grand-father.

“I will race at club days and work at coaching some of the young riders down in the South Island.”

In the 600cc Supersport class, fellow Cantabrian John Ross (Suzuki GSX-R600) followed Charlett’s example – he was in a similar position to Charlett in that he led his class by a whopping 28 points from Manukau’s Toby Summers (Yamaha R6), putting him slightly more than a full race ahead at the start of the weekend.

Reigning national No.1 Ross rode gingerly in Friday and Saturday’s races, and the first of Sunday’s two races, to ensure that he too wrapped up the championship.

“I felt the pressure on all the way through this series,” Ross said after successfully defending his 2013 title. “It’s been very competitive this season, the best for years.

“I was prepared to sacrifice a few points this weekend to make sure I won the championship.

“I will race again next year but don’t know what bike it will be. I’d like to give the superbike class a crack, but I’d also like to make it three in a row in the 600cc class too. We’ll just have to wait and see.”

A third Christchurch rider, 19-year-old Matthew Hoogenboezem (Honda RS125), also went into cruise mode during his final race to make sure of winning the 125GP championship, finishing ahead of an unlucky Tyler Lincoln (Honda RS125), of Hastings.

The 16-year-old Lincoln, a Hastings Boys’ High School year 12 pupil, crashed out of two of his 13 races in the 125GP class and finished a frustratingly-close four points behind Hoogenboezem.

Taranaki rider Hayden Fitzgerald (Suzuki) had an excellent weekend in two different divisions, winning the superbike class overall at the weekend with 2-2-3-4-3 placings – and he then sealed the Superlites class championship on his father’s Suzuki SV650.

“That’s my first national championship – and dad (Terry Fitzgerald) won the championship on the same bike 10 years ago,” Fitzgerald said. “And we just seemed to click on the superbike too this weekend.” 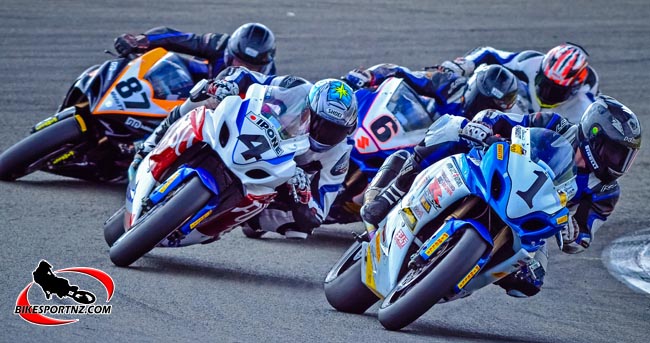