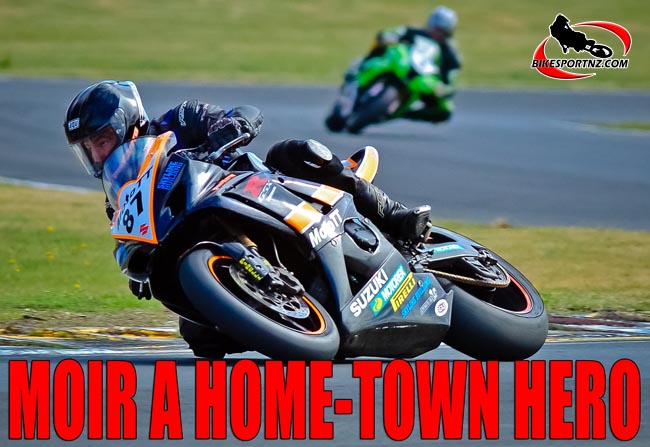 Scott Moir was the home-town hero as he convincingly won the New Zealand Superbike Tourist Trophy race at Taupo on Sunday.

The Taupo racer seized the lead on the first lap and kept his Suzuki there for the full distance, stretching the lead to win by nearly five seconds – an unusually big margin in national Superbikes where the racing is usually very close.

Moir has been racing a variety of motorcycles – starting in motocross – but has now really arrived as a Superbike rider, in an extremely competitive field. He scored his first victory in this premier category at Timaru in January and now he has earned one of the sport’s major trophies, riding a Suzuki.

“That would be the biggest achievement of motorcycling career,” the elated Moir said. “It’s a pretty big deal.

“It all went according to plan. I got a good start, stretched the gap, got the lap record along the way, and backed it off a bit towards the end.

“I’ve been making improvements to the bike and it’s going better now.”

The Superbike Tourist Trophy (TT) race was the feature event at the third round of the national road-race championships. Other classes also had TT races for their categories.

Second today was Hamilton’s Nick Cole, who crashed out of Saturday’s opening race when the traction control on his Kawasaki failed because of an incorrect wheel fitment.

Charlett had only ridden on the tricky Taupo circuit twice before and regards it as his bogey track but was quite happy to keep racking up the points with finishes of fifth and fourth in the two races.

He now leads Cole by 24 points with five races to go in the double-header round at Manfeild next weekend.

The third races for the Superbikes and some of the other classes were not run because of an oil spill on the track.

Young Christchurch rider Alastair Hoogenboezem achieved his first victory in the 600cc Supersport category when he won the TT for Suzuki, and followed it up by winning the final heat as well. His younger brother James also finished in the top five in the two races, both riding Suzukis.

Reigning champion and points leader John Ross, also from Christchurch, actually finished first in the TT but was hit with a 20-second penalty for jumping the start on his Suzuki. He was credited with sixth.

New Zealand Superbike Championships, round three, Taupo, day two provisional results. Each class had one race counting as the TT (Tourist Trophy) for that category.