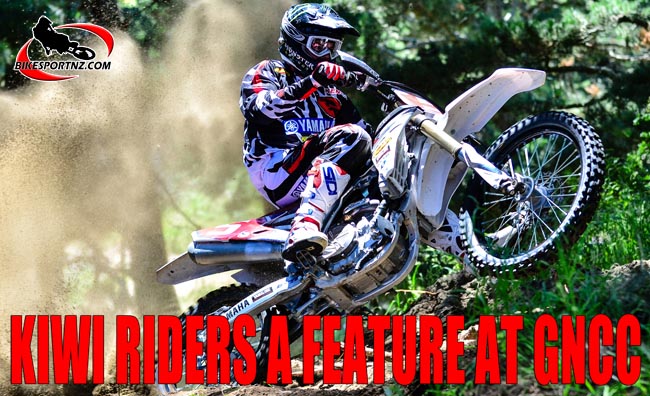 All three Kiwis who had entered the big race finished inside the top 20 at the opening round of this season’s Grand National Cross-country Championships in the United States.

With the various classes all run together, but scored separately, casual observers may have actually missed the fact that 250cc bike riders Mead and May were actually first and seventh respectively in the XC2 class.

The race began with drama, a huge pile-up at the start claiming several notable victims.

The two riders who dominated last year’s championship, Mullins and defending 2013 GNCC national champion Kailub Russell, were down in a heap in turn one, complete with bent handlebars and bike parts sent flying everywhere.

But Mullins wouldn’t be denied, the 2011 GNCC champ quickly making his way from nearly last into the lead position by the second lap. From there, Mullins was locked in a heated battle with Kiwi hero Whibley that lasted for nearly an hour.

“We started to open a gap on the other riders,” Whibley said.

“We both ended up gassing early and I needed goggles. I came out of the pits in the lead again and then got stuck in one nasty mud hole. Charlie used the outside line that had just opened up to retake the lead. I pushed hard to close the gap and later in the race found myself back in the lead after Charlie went down in the fast grass track. Charlie again retook the lead just before the scoring section.

“Early in the second to last lap, I clipped something in a deep rut that bent my brake lever back to my foot peg. I stopped and kicked it out so the wheel would roll. I stopped again further down the track when I sought out some help to lay the boot into it because it was so far bent I would stand on the brake when I stood on the pegs.

“By this time, Charlie was gone and now I just need to hold onto second. The brake kept snagging in ruts and bending out again, so I just kept kicking it in when I could and made it to the line.”

In the end, Whibley, who had spent much of last year battling an injury, was happy to start the year with a solid second place finish.

A furious battle for third erupted between Australian rider Josh Strang and Thad DuVall, with Strang grabbing the final podium position by less than one second.

Meanwhile, although not on a podium, the result achieved by Yamaha ace May was certainly impressive, especially considering it was the 20-year-old BikesportNZ.com rider’s GNCC debut in the United States and that he also ran out of fuel.

“It was a hard race with rain during the week leading up,” said May.

“Florida is flat, so the water was sitting so made for some muddy bogs around the track. I got a decent start inside the top 10 and banged handlebars a bit on the first lap, but I got through the carnage.

“The race went smoothly until the second to last lap when a guy on the track pointed me into a bog, so I used a lot of energy getting my bike out. I ran out of gas on the last lap but managed to push my bike to a guy with some gas and completed the race.

“I’m so very happy with the first race over here. Bring on the next race next weekend.”

Round two of the GNCC series next weekend is set for Washington, Georgia, in Wilkes County between Athens and Augusta.