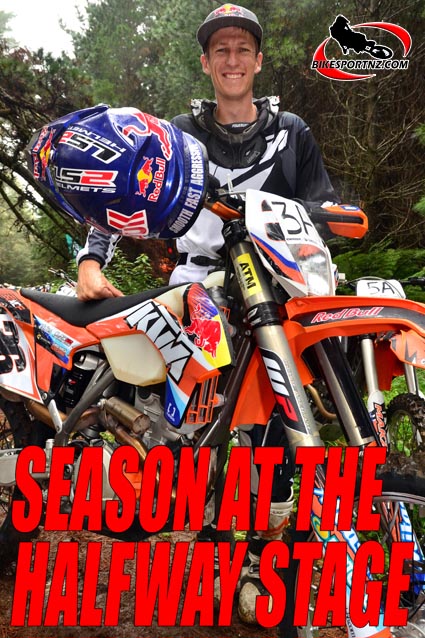 The gap is starting to widen at the top of the New Zealand Enduro Championship standings and that suits Aucklander Chris Birch just fine.

The Birch/KTM juggernaut continues in this season’s New Zealand Enduro Championships as the 33-year-old from Glen Eden kept his unbeaten run going as he won the third round of six in the KTM-sponsored 2014 series in the Riverhead Forest, north-west of Auckland on Sunday.

Birch also won outright at rounds one and two, at Whangamata and Porirua respectively, and it seems he might be threatening to compile another win-streak in 2014, just like the one he celebrated when he also claimed the title outright last season.

Birch finished ahead of the eventual runner-up, Mokau’s former national champion Adrian Smith (Yamaha YZ250), Birch’s winning margin 74 seconds at the end of seven tough special stages, not counting all the tough off-road riding required just to get from section to section

Third overall was young Auckland rider Liam Draper (Husqvarna TE125), his result all the more remarkable because he was riding a 125cc bike on a circuit that Birch described as “unusually fast”.

“The course was not at all muddy or slippery like it usually is,” said Birch.

“I drew the No.1 start position and that meant I was on the course first, which is not always the best thing, but at least it meant I had no dust and just clear air in front of me.

“I guess you could say that the Riverhead Forest is my home turf … I grew up just 10 minutes’ drive away from there, but I have not been in this forest much at all in recent times.”

Even with three outright wins from three starts this season, Kiwi international Birch is still taking nothing for granted.

“There is still a long way to go and a lot can still go wrong. There will be plenty of opportunities for me to stuff it up,” he laughed. “But I am very happy with how things are going at the moment.”

The riders next head to Christchurch for round four on April 5, followed by round five at Oparau on April 19 and, finally, it all wraps up at Waimiha, in the King Country, on May 10.