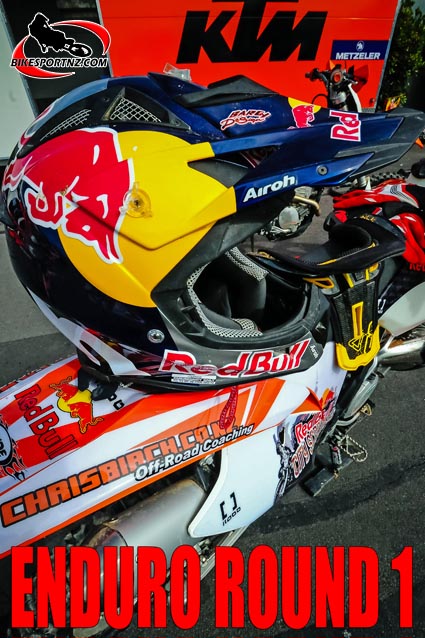 Auckland’s Chris Birch could be forgiven for being just a little bit paranoid, believing that everybody is out to get him.

And that’s because they are.

The Kiwi international off-road motorcycle ace from Glen Eden was runaway winner of the New Zealand Enduro Championships last season, winning it outright as well as clinching the over-300cc four-stroke class title, and he’s again the favourite to win this year’s KTM-sponsored six-round series which kicks off on the Coromandel Peninsular on Saturday.

Birch won all six rounds on his way to victory last season, although his many challengers were never too far behind.

Birch can’t afford to rest on his laurels because it is another talent-packed field of riders who line up to oppose him again this season.

Hosted by the Thames Valley Motorcycle Club, the course for Saturday’s competition will be laid out in the Taungatara Forest, just north of Whangamata, and it is expected to offer all sorts of challenges to the unwary.

“Winning the national title again would be nice, but I’m not taking anything for granted,” said Birch.

“I will ride the same KTM 350 XCF that I’ve been using lately and I am fit and free of injury at the moment, so I’m raring to go.

“Mike Skinner and Callan May are racing overseas this season and Jason Davis is sidelined with injury, so I won’t have to be concerned about them, but Adrian Smith will be a threat to me.

“But I don’t see any reason why I can’t win the title again.”

Following racing at Whangamata on Saturday, the series continues with round two near Wellington on March 8. Round three is in the Riverhead Forest, near Auckland, on March 23, followed by round four near Christchurch on April 5, with round five at Oparau on April 19 and the sixth and final round at Waimiha on May 10.