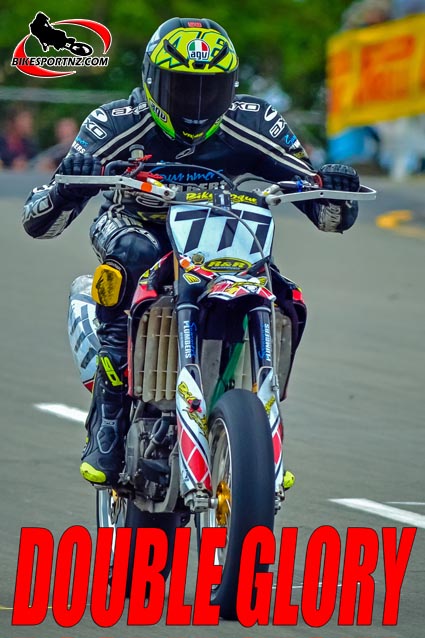 Manukau’s Toby Summers is as good as his word.

The Yamaha ace declared before the weekend that his plans were to go to Paeroa on Sunday and again win both the Formula Two and Super Moto classes at the iconic public street race and that’s exactly what he did.

He then raced his roadrace-modified Yamaha YZ450F dirt bike to win the day’s Super Moto race, this time finishing ahead of Taupo’s Scott Moir (Aprilia) and Tauranga’s Duncan Hart (Yamaha).

Summers had also won both classes at Paeroa the previous year, the only difference being that this year the race programme was shaved back to just one race for each class after a huge oil spill on the circuit made it too dangerous to continue.

“I was behind (Wanganui’s) Ashley Payne in the F2 race when he crashed. After that I just cruised really,” said Summers.

“It’s a pity I wasn’t being pushed really because I did want to take the lap record, but I missed out on that.

“I actually thought the other riders were right behind me for a bit early in the race, because I thought I could hear them. But that was just my own bike’s engine noise echoing off the buildings and crowd barriers. When I managed to have a peek behind me there was nobody there.

“I finally managed to get past him and that was that really.

“It’s a pity there weren’t two races for each class because I’d already spent the prizemoney that I didn’t end up getting,” he laughed.

The final round of that series was held on the public streets of Wanganui on Boxing Day and street racing is obviously something that Summers has a fondness for, not to mention also having a talent for it.

Summers’ next big outing will be to race at round three of the New Zealand Superbike Championships at Taupo on March 23.

After Taupo, the series heads to a climax at the fourth and final round at Manfeild, on the outskirts of Feilding, on March 29-30.