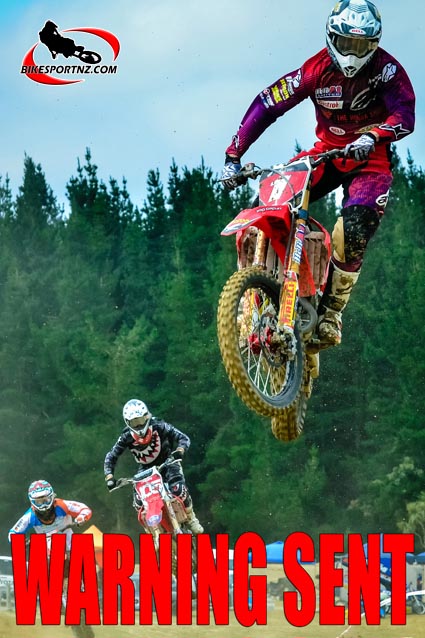 Mount Maunganui’s Cody Cooper has fired a warning shot to start the national motocross championships season and indicated to his rivals they can expect a huge fight on their hands if they want to take away the Honda star’s No.1 number plate.

Last season’s national MX1 champion arrived at the first of four rounds at Pleasant Point, near Timaru, on Saturday determined to send an early message to his international-class rivals and he did just that by winning two of the day’s three MX1 races.

A poor start in race two left Cooper with work to do as he struggled to see through the swirling dust clouds and, after giving a valiant chase to Dale and MacKenzie, settled for third place at the finish.

But then came the day’s third and deciding final race and this time Cooper made no mistakes, shooting into the lead from the start and simply running away. He finished this race a massive 14 seconds ahead of runner-up MacKenzie.

Cooper’s 1-3-1 results gave him a three-point lead in his title defence over Dale as the riders pack up to head north and round two at Tokoroa in two weeks’ time, the Honda star so far on target to retain his MX1 crown and perhaps make it two national titles this season after he had already clinched the New Zealand Supercross Championships open class title back in November.

“We came here with a goal of grabbing three holeshots … we only got two today, but we did learn something key today, something that will be important as the series moves on,” said The Honda Shop Racing Team manager Ben Townley, the former world motocross champion from Tauranga also a former New Zealand MX1 champion.

“I was happy with Cody’s first race and his third race, so overall it was a good day,” said the hard task master.

“Johnny (Phillips) had only a so-so day today,” said Townley.

“We will need to do some work with him. But the next round at Tokoroa is virtually his home track. It should suit him.”

The series now heads to Tokoroa for round two on February 23. Round three follows in Pukekohe on March 9 and, finally, it all wraps up in Taupo on March 22.