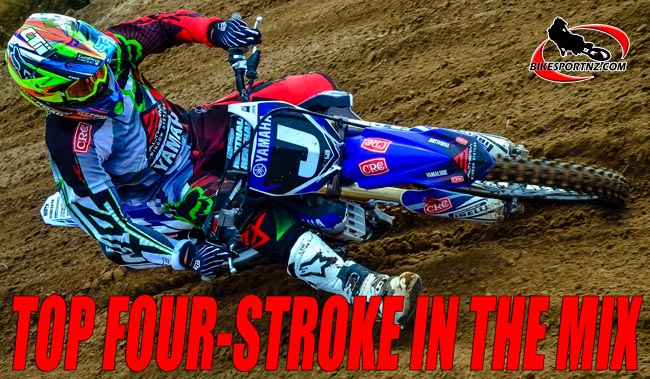 If it is true that what doesn’t kill you makes you stronger, then the Altherm JCR Yamaha Racing Team must be very strong indeed.

It was a tough day of racing at round two of the New Zealand Motocross Championships in Tokoroa on Sunday, but, despite it being a brutal test of character, the Altherm JCR Yamaha Racing Team riders all emerged with credit.

It was enough to elevate MacKenzie from third to second spot in the championship chase, albeit still 21 points adrift of series leader Cooper.

“I had a terrible day,” said the modest 29-year-old from Edinburgh, who considers himself “almost a Byron Bay resident” nowadays after spending much of the past two years living in the north New South Wales area.

“I felt really uncomfortable on this track. But I’ll be staying with (team manager) Josh Coppins for the next month now and I’ll spend a lot more time on the bike and that will help.”

MacKenzie is using the four-round New Zealand series as a warm-up ahead of his main focus, to tackle the Australian Motocross Championships, which kick off at Broadford, in Victoria, on March 30, although that doesn’t lessen his desire to win in this country.

The MX2 (250cc) class was a mixed bag for the Altherm JCR Yamaha Racing Team, with defending national MX2 champion Scotty Columb, from Queenstown, showing great fighting qualities to fight through from a bad start to finish fourth in race one.

He won the next race before suffering a huge setback when, with dust affecting his race bike, he turned to his back-up practice bike for the third and final race of the day.

As his team manager Coppins commented, “that proved, in hindsight, to be a mistake on our part”.

“The engine on the practice bike had already done quite a few hours and it didn’t survive the race.”

This dropped Columb from a close second to a distant third in the M2 class standings.

Meanwhile, fellow MX2 class rider for the team, Australian Jay Wilson, was on the charge.

After already clinching the New Zealand 250cc supercross crown for Yamaha earlier this season, the young Australian (pictured above) was determined to give the new 2014-mode Yamaha YZ250F four-stroke bike a solid racing debut and that is exactly what he’s now done.

Wilson finished 3-3-5 in his three MX2 outings – which puts him fourth overall in the championships rankings – and this means he is still the best-performed of riders on 250cc four-stroke machinery.

“We were looking solid with (Scotty Columb’s) 2-1 results early on, but the title is possibly out of reach for him now,” said Coppins.

“We will just keep focussed as a team and move forward from here,” said Coppins.

All is not lost for the various title challengers and, with the championship only at the halfway stage, there is still plenty that can happen.