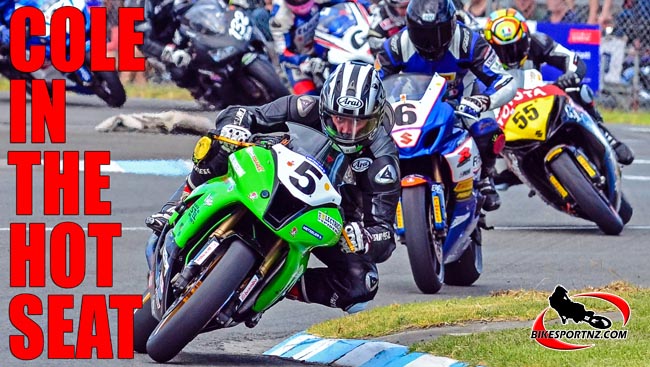 The ‘favourite’ tag sits comfortably with Hamilton racer Nick Cole as he sizes up another New Zealand Superbike Championship campaign this season.

On the eve of the first of four rounds of the 2014 series on the outskirts of Christchurch this weekend, the Kawasaki ace has every reason to feel relaxed.

The 27-year-old fitter and turner is on top of the New Zealand superbike scene at the moment, having just completed a successful Suzuki Series campaign, culminating with him scoring a hat-trick of wins at the famous Cemetery Circuit on the streets of Wanganui on Boxing Day, that streak of wins that day also giving him the main prize for the series, the Formula One crown.

Cole now takes his Red Devil Racing Kawasaki ZX-10R and heads to Christchurch for the start of the 2014 New Zealand Superbike Championship at Mike Pero Motorsport Park (Ruapuna), Christchurch, with his confidence at an all-time time.

He previously tasted national championship success when he won the 600cc supersport title in 2010 and, since his switch to the bigger 1000cc ZX-10R Kawasaki superbike, he has consistently figured among the top five in this premier class.

With last season’s national superbike champion Robbie Bugden, of Australia, not crossing the Tasman this season and nine-time former champion Andrew Stroud, of Hamilton, announcing his retirement in August, Cole finds himself in prime position to push ahead and take the New Zealand superbike title this season.

“We had great end to the Suzuki Series, taking the championship and winning the Robert Holden trophy,” he beamed. “To get my name on that Robert Holden trophy, alongside such legends as Holden and Stroud, is an amazing feeling. Those guys were idols of mine in the past.

“The races at the Wanganui street race topped off a great series and it was a fantastic start to the season as we head to the nationals.”

But Cole is not taking anything for granted and knows he’ll have a stern fight on his hands to fend off attacks from talented riders such as Feilding’s Craig Shirriffs (Suzuki), Christchurch’s Dennis Charlett (Suzuki), Auckland’s Jaden Hassan (Suzuki), New Plymouth’s Hayden Fitzgerald (Suzuki), Wellington’s Sloan Frost (Suzuki), Whakatane’s Tony Rees (Honda) and Te Awamutu’s David Hall (Suzuki), not to mention the international stars who have arrived in New Zealand to tackle the championships this season.

Frost is possibly going to be Cole’s biggest rival for the superbike crown. Frost won two of the six F1 races in the Suzuki Series and, despite two crashes leading to DNFs, he still finished third overall.

After the opening round of the New Zealand Superbike Championships in Christchurch this Sunday, the series heads to Levels Raceway, Timaru, the following weekend (January 12), followed by Taupo Motorsport Park on March 23, before wrapping up at Manfeild, on the outskirts of Feilding, on March 30.