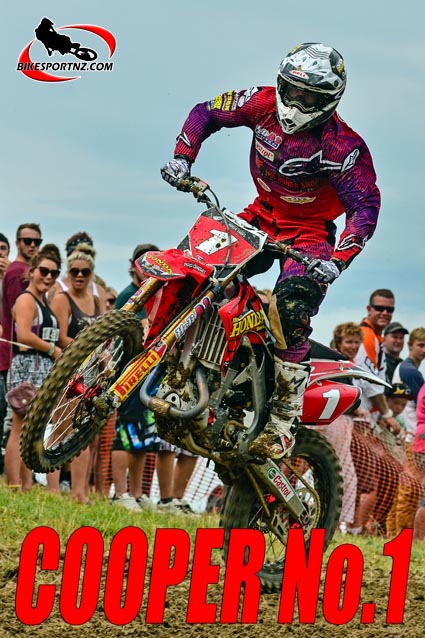 Mount Maunganui’s Cody Cooper has again won the New Zealand Motocross Grand Prix title, although he certainly had to work hard to repeat the feat this time around.

Cooper rode a Honda to collect his first big win at the annual New Zealand Motocross Grand Prix at Woodville in 2007 and was riding a Suzuki when he came close to winning it a second time last season, before being forced to settle for second place, behind Tauranga international Ben Townley (Honda).

But then 2012 and 2013 Woodville GP winner Townley retired from full-time racing last year and immediately took on the job as manager of The Honda Shop Racing Team, his first order of business being to recruit former rival Cooper to join him under the red Honda awning.

The changed dynamics this season certainly made national MX1 champion Cooper favourite to step up and reclaim the top step of the podium at this 53rd annual running of the iconic Honda-sponsored Woodville event.

With the four-round nationals set to kick off near Timaru in just under two weeks, Cooper’s mission at the weekend was to send a signal to his rivals by winning the top two titles at Woodville, the MX1 class title and the Invitation MX GP Feature Race.

However, Cooper was rocked by the power-packed potency of Australian KTM team riders Ford Dale and Kirk Gibbs who had crossed the Tasman to tackle Woodville on Sunday.

Dale won the first two MX1 class races of the day and looked odds-on to wrap up the MX1 crown and perhaps to win the Invitation Feature Race as well – the race that has the NZ GP crown as its prize.

But Cooper came on strong in the feature race to catch and pass fast-starting Dale and then build an eight-second buffer before the finish.

That was job one complete, the GP title tucked away.

Dale again looked comfortably positioned in the day’s third and final MX1 race until he dropped out with painful wrist cramp, leaving Cooper and Gibbs to battle for the win. Again Cooper managed to force a way past the Australian visitor and set off over the horizon, Gibbs eventually falling into the clutches of Taupo Suzuki hero Brad Groombridge, who snatched away the runner-up spot.

So that was Cooper’s second job complete, consistency putting the MX1 class win in the bag.

The final overall MX1 standings had Cooper on top, Groombridge in second and Gibbs third, with two-race winner Dale, one of the fastest men on the track, unfortunately forced to accept fourth overall.

“Consistency has always been one of my downfalls in the past … but perhaps not now,” declared the 30-year-old Cooper afterwards.

“It was very hard to pass on this track and I wasn’t getting good starts. You really can’t sprint on this track because it’ll bite you.

“I knew the Aussies would be fast and I knew if I could get a decent start I’d be able to match their pace. I let myself down a bit with my starts … I was popping wheelies out of the gate.”

Cooper will be working on his starting technique over the next couple of weeks, hopefully finding a remedy before the New Zealand Motocross Championships kick off at Pleasant Point, near Timaru, on February 8.

Pahiatua international Paul Whibley (Yamaha) was simply too good for his rivals in the crowd-favourite River Race, the two-time United States cross-country champion comfortably winning both races from Honda’s Townley, who had briefly come out of retirement to “tick the bucket list box” and contest the splash-filled race.

Thanks to Nicole Bol and her MX Timing team.