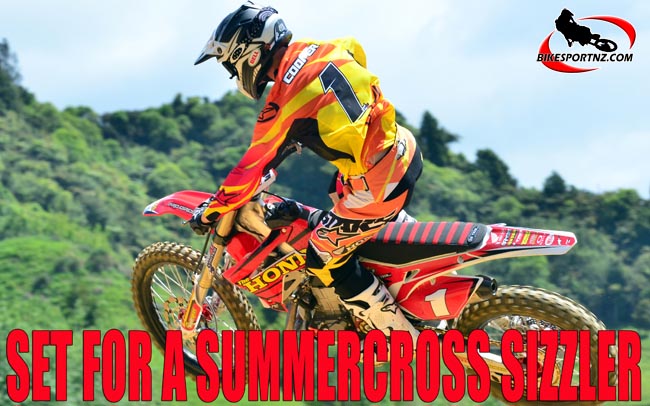 This season’s annual Whakatane Summercross is going to be a ‘clash of the titans’ like never before.

As well as attracting the cream of New Zealand motocross racers to the Awakaponga circuit, near Matata, just outside Whakatane, each summer, the Honda-sponsored event will this year have a new twist.

Kiwi internationals Josh Coppins and Ben Townley, men who have in the past been favoured to win the Honda Whakatane Summercross, recently retired from fulltime racing but they are not lost to the sport and this year both men will still have a huge influence on who does the winning at the December 28-29 event.

Coppins and Townley now manage high-profile race teams for Yamaha and Honda respectively and they will both arrive at Awakaponga with a potent strike force.

“Here we have two elite riders who have taken off their helmet and boots and picked up a clipboard and stopwatch. This is a head-to-head battle on the sidelines,” said host Bay of Plenty Motorcycle Club spokesman Tony Rees.

“These men know what it takes to win and it will be great to see the battles between their team riders.”

“This event will be the first big hit-out of the season to feature all the major teams,” said Rees. “It is a great time of year for racing and, fingers crossed, the weather should be fine.

“The club has built a new mini motocross section, with features that will really test the youngest riders, although the more advanced of the 65cc class riders are also invited to race with the juniors on the main track on Saturday.”

The Honda Whakatane Summercross is a two-day affair, with minis and juniors racing on Saturday and seniors, women and veterans racing Sunday.