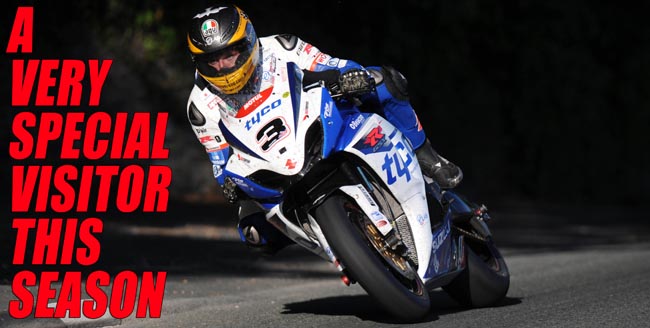 Wanganui will welcome a very special guest to the Cemetery Circuit motorcycle races this year, the third and final round of the 2013 Suzuki Series on Boxing Day.

Englishman Guy Martin is coming to New Zealand to compete in the Suzuki Series, but only in the final round at our world famous Cemetery Circuit.

Unlike most other top class riders who come to race at Wanganui, Martin has a wealth of other interests, far removed from international motorcycle road racing but even then he is unique because he has had considerable career success on street circuits.

Guy Martin is being accompanied to New Zealand by his father Ian, himself a former motorcycle racer with a career that included 19 starts at the Isle of Man between 1976 and 1988.

It’s fair to say the name of Guy Martin would not have been known to many New Zealander’s outside those with an abiding interest in the annual Isle of Man Tourist Trophy races, until the nationwide release in 2011 of the Isle of Man documentary “TT3D: Closer to the Edge”. 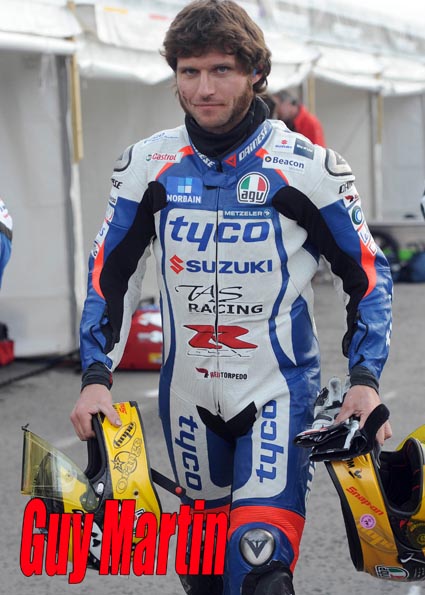 The film examined the motivations of riders who raced at the TT, those who took their chances on the meanest streets in sport, a story of freedom of choice and the strength of the human spirit.

The film followed the leading riders at the 2010 TT, and in particular Guy Martin who ended the meeting in a horrifying fireball when he lost control of his Suzuki Superbike at 275kph.

New Zealander Paul Dobbs, a winner at the Cemetery Circuit six months earlier died at the same spot the day before.

Martin first raced at the Isle of Man in 2004 for a 7th place finish in the blue riband Senior TT, and he rode the fastest lap ever by a newcomer.

In 2005 he was 3rd in the same race, a podium in just his second year on the world’s toughest race circuit.

At that same meeting he finished in four other races and was the only rider that year to do so, a testament to his personal fitness and his machine reliability. Martin’s passion for street circuits had its beginnings at Oliver’s Mount, in Scarborough, North Yorkshire, the only natural road circuit in England.

At just under 4km long, the narrow twisty circuit first ran in 1946, predominantly for motorcycles only, and the four meetings it stages each year are popular with spectators and riders, many Isle of Man regulars.  Martin is a popular and regular winner at Oliver’s Mount, with over fifty wins to his credit.  He was a Gold Cup winner again there this year.

While the Isle of Man is perhaps the best known road circuit in the world there are two in Northern Ireland that are home to major meetings every year.  One is the circuit near Londonderry called “The Triangle”, 14.45km of country roads linking three towns and home every May, two weeks before the TT, to the North-West 200, the biggest annual sporting event in Ireland.

The other is the Dundrod circuit, just south of Belfast, 12km of country roads which every August becomes the home of the Ulster Grand Prix and the fastest motorcycle race circuit in the world. Up until 1971 the Ulster Grand Prix was also a round of the 500cc World Championship which means that all the world’s top riders up till that year competed there.

That list is impressive with names like Hailwood, Surtees, Read, Agostini and Ivy.  Kiwi Ken Mudford became the first New Zealander to win a world championship race with his 350cc Grand Prix win at Ulster in 1953 and Hugh Anderson won the 125cc Grand Prix there in 1963 and 1964.  New Zealander Bruce Anstey, a Cemetery Circuit winner in 2004, is the current lap record holder.

Guy Martin has been almost unbeatable there in the past three years, continuing a mastery of the super-fast Dundrod circuit first established in 2006 when he won both Superbike races and both Supersport 600 races, a rare feat for any one rider, and he is now the fourth most successful rider in the history of the event.

He has also been a regular winner and is the current outright lap record holder at the Billown circuit, a street circuit of 6.44km on the outskirts of Castletown in the south of the Isle of Man where the Southern 100 is held in mid-July every year.

Martin has yet to win an Isle of Man TT and his most recent best result was the 2011 Senior TT as runner-up to John McGuinness, the current lap record holder. He has started in 46 Tourist Trophy races for 34 completed races and 13 podiums.

Martin qualified fourth fastest this year and finished in 4th place in the Superbike TT and 5th in the Senior TT. Guy Martin, now 32, arrives at the Cemetery Circuit this year with star billing.

A truck mechanic by trade, in 2011 he had his own prime-time TV show on BBC One, “The Boat that Guy Built” and in 2012 a Channel 4 Series “How Britain Worked” focusing on engineering projects from the Industrial Revolution.

Next year he will host “Speed”, a four-part series for Channel 4 which sets out to create speed-based challenges where Guy will explore the boundaries of physics so as to understand the science of speed. The fact he has not won an Isle of Man TT in no way detracts from his reputation as one of the best road circuit racers in the world, and one of the most popular.

Back home he rides for Team Tyco Suzuki but at the Cemetery Circuit he will compete in the F1/Superbike class and the Robert Holden Memorial on a Superbike generously supplied by Suzuki New Zealand. Guy Martin is very English and he loves his tea.