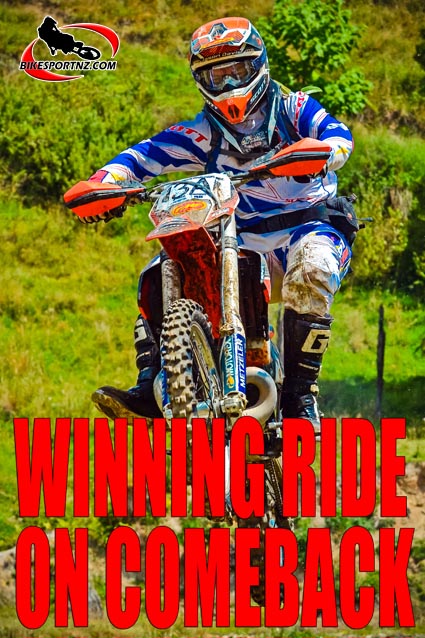 A comeback from injury to top-level, high-speed off-road motorcycle racing is always a difficult proposition and sometimes it can even be a little scary.

But Whangamata’s Jason Davis made it look effortless when he won round two of the KTM Extreme Enduro Series in the Riverhead Forest, near Auckland, at the weekend.

National enduro champion Chris Birch, from Auckland, took his KTM 350XCF to win the opening round of the five-round series, The Nut Buster Hard Enduro near Christchurch, in late September, but overseas racing commitments kept him away from round two on Sunday, leaving the path clear for another rider to dominate.

And that’s where Davis stepped in on Sunday, charging through the field after a poor start to eventually take the lead on the third lap.

“It was quite dusty in the forest, so it wasn’t easy seeing where I was going some of the time,” said Davis.

Auckland pair Mike Skinner (KTM 250 XCF) and Liam Draper (Husaberg TE 125) kept Davis on his toes and, even when he was in clear air out front, the man from the Coromandel Peninsular could not afford to take it easy.

“I had to skip round one because of my injury,” Davis explained. “I needed my right knee to be reconstructed and this was my first ride back since that operation.

“I’m still not 100 percent fit but I’m getting stronger each day,” said the 25-year-old forestry worker.

“Riders are able to drop a round, so with me missing round one, it might not be too much of a problem.”

With two different winners after two rounds thus far, the series could turn into a real nail-biter by the time of the final round, the two-day No Way In Hell extreme enduro in April.

The third round of five in the KTM Extreme Enduro series is set for Tokoroa on December 7, at the Tokoroa A&P Show.