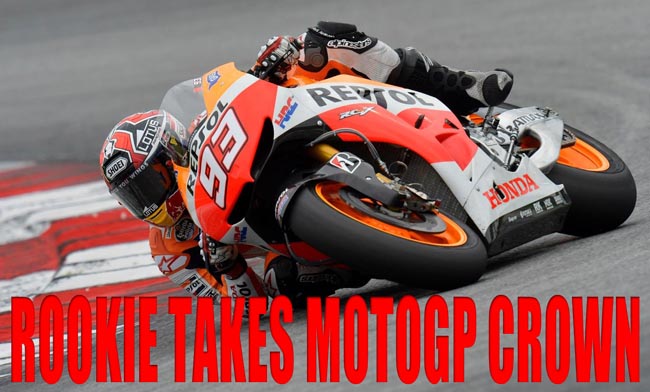 Spain’s Marc Marquez has become the youngest ever MotoGP world champion and the first rookie to take the title since American ‘King’ Kenny Roberts in 1978.

Marquez came into the event having seen a 43-point lead slashed to just 13 in the space of two races but held his nerve in the face of a brutal, but tactically perfect, attempt by Lorenzo to hold up the field.

Lorenzo – who needed Marquez to finish outside of the top four – slowed the pace to form an eight rider lead group, savagely retaliating whenever Marquez’s team-mate Dani Pedrosa took the lead.

But no matter how slow Lorenzo went, the support he needed from his fellow Yamaha riders never arrived. Team-mate Valentino Rossi struggled to pass Alvaro Bautista for fourth and couldn’t keep pace with the leading trio when he finally moved ahead of the Gresini Honda rider.

Lorenzo and Pedrosa made contact on several occasions, most notably when Lorenzo pushed Pedrosa wide during a re-pass at turn two – putting Marquez into the lead, with Pedrosa re-joining back in fifth.

That pass will be investigated by Race Direction after the race.

Lorenzo soon retook the lead from Marquez, who refused to get stuck into a fight.

Lorenzo then seemed to switch tactics and raise the pace, but Marquez ignored the bait and stayed a safe distance from the Yamaha star who went on to win his eighth race of the year.

Marquez allowed Pedrosa through into second place with five laps to go, crossing the line with both hands in the air before celebrating with his fan club.

The 20-year-old Marquez takes the youngest champion record from Freddie Spencer, who was 21 when he claimed the 1983 title.

Despite predictions that his all-action style would result in numerous DNFs, Marquez has finished off the podium just twice in the 18 races – falling from second place late in the Mugello race, then being disqualified (while battling for victory) due to a pit stop error at Phillip Island.

Instead it was experienced countrymen Lorenzo and Pedrosa whose title hopes were undone by accidents and injuries. Yamaha’s Lorenzo broke his collarbone at Assen, where he returned to claim a courageous fifth on race day, then re-damaged it next time in Germany.

Pedrosa also fractured a collarbone at the Sachsenring, and was launched out of the Aragon race when Marquez brushed the rear of his RCV, severing a traction control sensor.

Marquez received a penalty point for the incident, adding to the two he had received at Silverstone for ignoring yellow flags in a warm-up fall, bringing him to the brink of a back of the grid start.

Some of Marquez’s chief rivals have been openly critical of his on-edge riding style, while others feel Marquez can’t be criticised for ‘near’ incidents: You are either break the rules – and are punished – or you don’t.

Roberts went on to win three premier-class titles in a row and few doubt that Marquez has the potential to do the same. Marquez is signed with Repsol Honda until at least the end of next season.