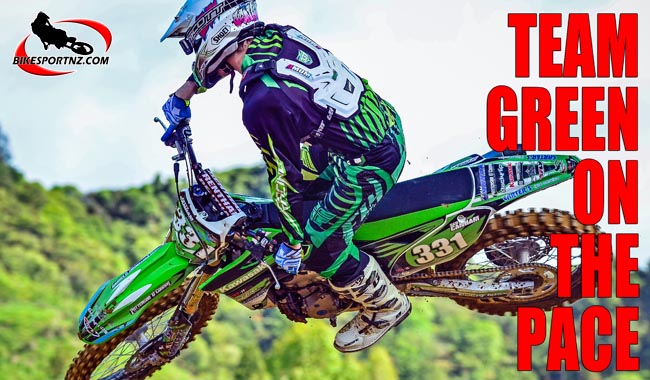 The podium is beckoning to Kawasaki pair Nick Saunders and Scott Canham this season. 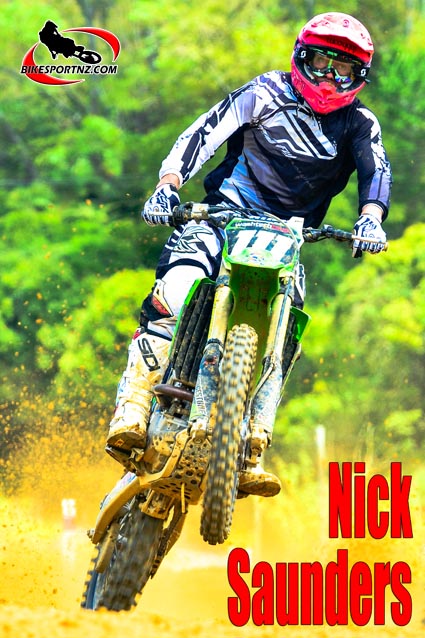 Taupo’s Saunders took his Fly Kawasaki New Zealand KX250F to the No.2 step on the podium at Te Kuiti, just behind former world and American champion Ben Townley (The Honda Shop Racing Team CRF250), also of Taupo, while Rotorua’s Canham took his Patterson-O’Connor BikesportNZ.com Kawasaki KX250F to claim the No.3 step on the podium … thus making it a Bay of Plenty clean sweep of the fiercely-fought MX2 (250cc) class.

Townley’s ride was a rare one, since he officially retired from fulltime racing in March, but the Kawasaki pair have a busy season ahead.

“I had heaps of fun today,” said Canham afterwards.

“It was very tight racing between first and sixth positions and a constant battle to finish in front. I even managed to put a pass on Townley in the day’s second race but I couldn’t hold him off and he got back past me again.

“It was a great thrill to be battling with a rider of Townley’s stature. I know he’s at the end of his professional racing career, but he is still a world class rider.”

The 28-year-old Saunders had been racing a Kawasaki KX450F in the MX1 class for the past few seasons, but this year he has opted to give the MX2 class a crack and his first couple of outings on the smaller bike have been very encouraging.

He finished among the top 10 in the MX2 class at the season-opening Labour Weekend Motocross Extravaganza in Taupo and then backed that up with his storming ride at the weekend’s Waikato Motocross Championships.

“The result was certainly a step in the right direction for me,” said Saunders.

“I’ve been off the bike for six months over winter and so the Taupo event was my first race. I’m racing MX2 class this season, which is much deeper in terms of talent, and I had forgotten how fast these young guys are. I’m looking forward to the next events.”

There is no rest for the nation’s top riders with a full calendar of events leading up until Christmas, followed by the New Zealand Motocross Grand Prix at Woodville in January and then the four-round nationals starting in February.

Townley is not expected to tackle the Auckland Motocross Championships next weekend, although both the Kawasaki riders will be there, hoping to continue the momentum and again battle for outright honours.