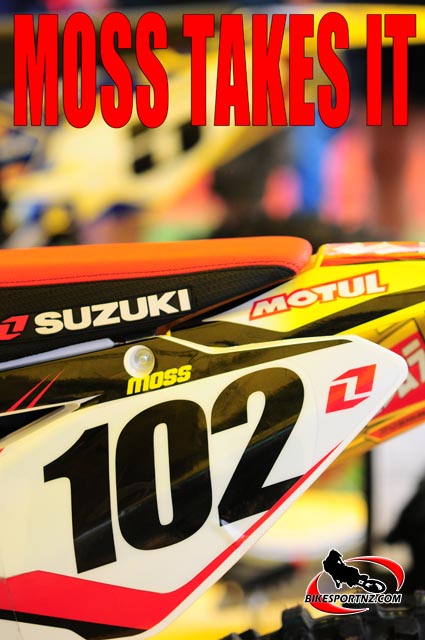 Aboard the 2014 RM-Z450, Moss was at his immaculate best in Queensland, topping timed qualifying, winning his heat race and leading all 20 laps of the main event on his way to the race win and championship after entering the finale five points behind the lead.

It’s been a remarkable year for Moss in his maiden full-time campaign in the premier category, sealing both the Supercross and MX Nationals Championships for Suzuki in his return to the Jay Foreman-managed Motul Pirelli Suzuki squad.

“My feeling right now is indescribable,” 25-year-old Moss commented. “I just wanted to do my own thing, stay clean and that’s exactly what I was able to do. All day long I felt confident, I knew I had to do my job and get a good start in the main, which is how it turned out.

“I’m really thankful to Jay and Jess Foreman, as well as the entire Motul Pirelli Suzuki team – now we need to come back and defend these two number one plates next year!”

It was a Suzuki sweep of the Supercross podium overall as Moss’ twin brother Jake claimed second for the round and series, while American Josh Hill salvaged third despite a DNF in the final main event of the season.

Motul Pirelli Suzuki team manager Jay Foreman was proud of Moss’ efforts once again, the team making the most of its tight-knit structure across the course of the season.

“This is great,” Foreman said. “Matt was never a gamble for me, we’ve worked together before and won championships together before. Once Matt is in the right place, anything is possible – he’s so determined and he’s a winner. This result is really incredible for the whole team.”

NOTE – There was an official protest lodged after the race, at this point in time the results or the exact circumstances of that protest are not officially known, though it should not have any impact on the Matt Moss’s championship title.

It was a case of déjà vu in the Pro Lites final, with Serco Yamaha’s Luke Styke taking the title ahead of Carlton Dry Honda Racing’s US import Gavin Faith.

Faith, who also took a five-point lead into the weekend, crashed twice in the final and finished the round eighth. Styke controlled the 15-lap race from the onset to greet the chequered flag ahead of Choice Motorsports Brendan Harrison and his Serco Yamaha team-mate Luke Arbon.

“It is a dream come true, two titles in 2013, it hasn’t really sunk in yet,” Styke explained.” I was concentrating on the motocross this year and the plan with supercross was to hopefully play it safe and look forward to Europe.

“I really can’t believe it I am lost for words and can’t thank the team enough for sticking behind me.

“Everyone trains hard but it is the guy who puts in the most work that ultimately ends up on top,” Styke concluded.

Gold Coast rider Jay Wilson secured the Under 19’s title with a second place finish to Berry Sweet Yamaha rider Corey James in the final round.  The GTYR Yamaha rider dominated the 2013 season winning four of the five rounds to take the title 19 points ahead of James.

Yamaha’s Wilson Todd edged out KTM rider Brock McLeary in the Junior Lites class. Winning the fourth round of the series, the Queensland rider finished four points ahead of McLeary in the championship standings.

Under 19’s Champion GTYR Yamaha rider Jay Wilson. Jay will be in the South Island later this week for the two round NZ Supercross Championship riding for the Altherm JCR Yamaha Team.

Under 19s championship standings (After Rd 5 of 5):