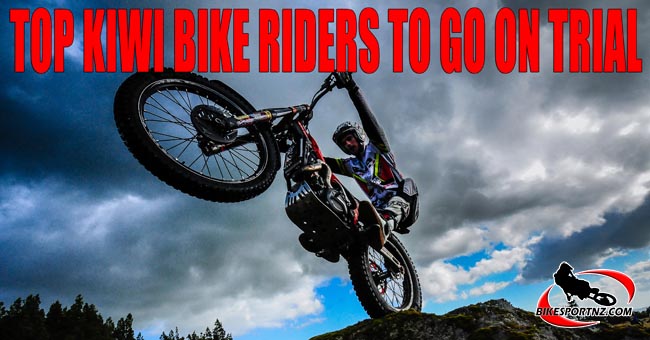 He’s the ultimate “rock star” of motorcycling, but defending champion Jake Whitaker is taking nothing for granted ahead of this season’s three-day New Zealand Moto Trials Championships in the Bay of Plenty this coming Labour Weekend.

The Wellington rider rode a faultless campaign last season to make it six national Expert Grade titles in a row and he is brimming with confidence as he chases national crown No.7 on tricky terrain near Te Puke this weekend.

He has nothing left to prove in a riding career that features so many highlights, but he still recognises there is a high chance that everything could fall apart if he makes even the smallest of errors.

“I really want to equal the seven-title record of (Napier’s) Warren Laugesen but I’m taking nothing for granted,” said Kiwi international Whitaker, who was also the Australian trials champion in 2010, 2011 and 2012.

“I’ll be up against Warren again this weekend and, even though I’ve had a good run over recent seasons to win six years in a row, it’s the sort of sport where everything can quickly go wrong. It’s always bound to be slippery on the rocks and there will be tree roots to trip up on as well, so it’s never really easy and a small lapse in concentration could end in tears.

“There are a few young guys who are stepping up to the Expert Grade this year too, riders such as Dunedin’s Blake Fox, Rotorua’s John Haynes, Nelson’s Nick Oliver and Taranaki’s Matt Foster and the certainly have my respect.

“I have not really had the best of build-ups either because I have been racing cross-country and enduro events and not been near a trials bike at all until just recently,” said Whitaker.

“I hope my trials riding skills are sharp enough again and that I can finish the weekend with my feet up. We’ll find out this weekend won’t we?

Titles will also be contested in the Intermediate, Presidents, Clubmans, Twin Shock, junior and women’s categories.

With this branch of motorcycling sport, the emphasis is not on speed. The prime aim is on conquering the extreme terrain without touching feet on the ground or falling off. Points are lost for these “faults” and a rider with the lowest score wins.

Access to both days’ riding will be signposted from the respective main roads. There is no charge for spectators. Riding starts at 10am each day.

The venue for day one on Saturday, October 26, is Muir’s Property, 746 No.4 Rd, Te Puke and that will be signposted from State Highway 2, No.3 Road, Te Puke.

The third and final day is scheduled for Meredith’s Property, 745 No.4 Rd, Te Puke, signposted from State Highway 2, No.3 Road, Te Puke.