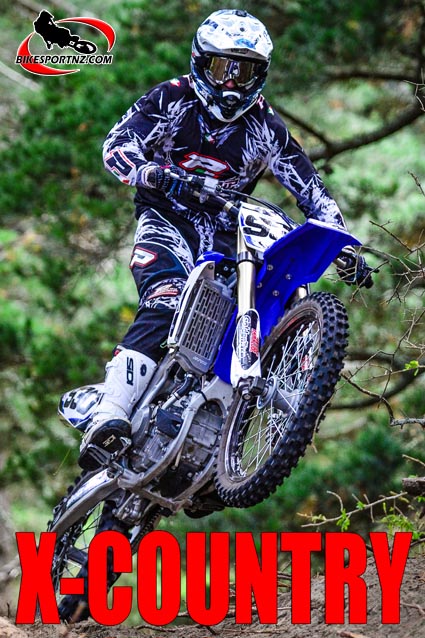 It was Ground Hog day again at the final of the Spectrum Motorcycles Woodhill Two Man cross country on Sunday with Colemans BikesportNZ.com rider Joshua Jack and partner Luke Mobberley again dominating from the start.

However there was an ounce of luck in the final lap as Mobberley lost five minutes after aggravating an older injury.

How this will affect their form going into the Suzuki 6-hour this coming Saturday remains to be seen.

BikesportNZ.com Yamaha rider Callan May and Mitchell Nield came home for a very solid second (and second overall in the series) ahead of team Shaun Fogarty and Aiden Kiff who had an all-day, ding-dong battle with Jono Hill and Logan Beuth taking third place by a very slim four second margin.

With 30% of the track more open farmland than the previous rounds, Kawasaki rider Jason Dickey from Raglan managed to stay with solo favourites Adam Reeves (Sargents BikesportNZ.com Yamaha) and Rueben Vermeer for most of the three hours, but eventually had to settle for third, finishing one minute behind Vermeer who in turn was a minute behind the silky smooth riding Reeves.

Vermeer lead from the start with Reeves (with the oversized tank) happy to tuck in behind knowing that Vermeer had to pit each lap for fuel. A tactic that less experienced riders should take note of.

Reeves’ form this year has been outstanding with the Yamaha ace (pictured here) seemingly riding well within himself and on paper should be a firm favourite for six hours of riding at Tokoroa.

A feature of the Junior/Ladies early morning races this series has been the dominance of young Kawasaki rider James Scott and his partner on a KTM, Daniel White. The partnership was never challenged all day and they even had the stamina to set the fastest lap time on their final lap earning them a perfect series score in all three races. Definitely riders of the future.

Emma Walling (in her last year of juniors) riding by herself in the solos again dominated hardly breaking a sweat to finish second in front of first time entrant Sam Stevens from Glenfield.

So, in the wrap-up, the final mention deservedly goes to Jack and Mobberley. What a team!