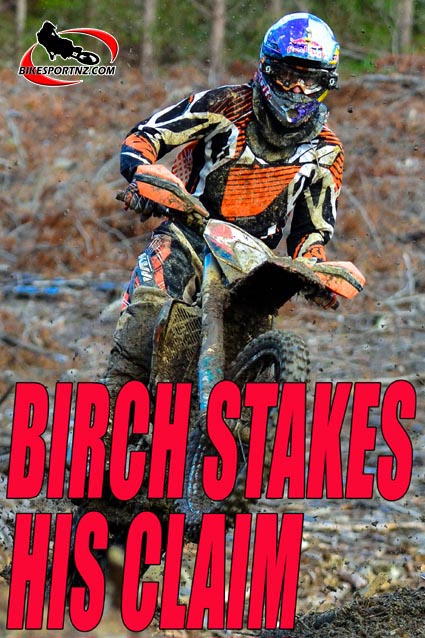 The 32-year-old Kiwi international was a convincing winner of the opening round of the KTM Extreme Enduro Series — the Nut  Buster  Enduro — in Canterbury on Saturday, setting the tone for what could be another steak of wins for the KTM rider.

Birch recently wrapped up the 2013 national enduro championships with a round to spare and he could now be set to dominate the KTM Extreme Enduro series as well, particularly in light of the impressive form he displayed at the Value Cars-sponsored Nut Buster event on Saturday.

A total of 118 riders lined up for the annual Nut Buster hard enduro, the venue just west of Christchurch.

Whitaker tried his to chase down Birch, but, after a problem with his clutch, he was forced to make an emergency pit stop he was then unable to challenge multi-time Roof of Africa winner Birch.

“The event was a huge success, with everyone getting what was to be expected … one tough nut-busting ride,” said Clarke afterwards.

“The course was about 28kms long and took most riders about an hour and half to complete it. The track itself was a real credit to the men who prepared it, as it really hung in there with only one steep uphill climb causing a bit of a headache for some.

“Other than that, there were no bottle-necks and nothing was unmanageable. It was just plain hard work,” said Clarke.

The clubmans’ class was won by Rangiora’s Rob Fraser, with Steve Paton and Josh Dando finishing second and third respectively.

The Nut Buster event for 2013 proved to be a great start to the series and sets a high standard for the remaining rounds.

The next round of the KTM Extreme Enduro series is set for the Riverhead Forest near Auckland, the Riverhead 100, on November 17.