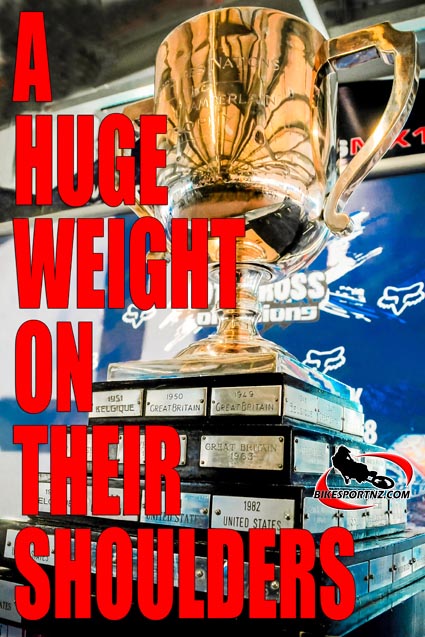 Ryan Dungey, Justin Barcia and Eli Tomac have a huge weight of responsibility resting on their collective shoulders.

They know the American tradition for winning at the Motocross of Nations is a tough cross to bear and the hopes and dreams of so many fans will rise or fall on what happens at Teutschenthal, in Germany, next weekend.

But this trip to Europe could also be one of Team USA’s toughest assignments yet.

Managed by expatriate Belgian and motocross legend Roger DeCoster – who has lived in the US for many years and managed nearly every US team since 1981 – the American trio are determined to bounce back from the shock loss in the deep sand of Belgium last year, when the three men from Germany instead won the main prize (the Chamberlain Trophy) and Belgium finished runners-up with the Americans forced to settle for an unaccustomed third place.

With a record 22 MXoN crowns to their credit over the past 30 years, there’s no reason to suggest the men in the stars and stripes colours won’t be among the favourites in Teutschenthal, but the pressure to perform will be on Dungey, Barcia and Tomac as they seek to “restore honour”.

Team USA won its first Motocross of Nations title in 1981 and, from that moment on, made it a bit of a winning tradition, until they came unstuck last year.

Regardless of the individual race results in Germany this time around, Team USA is still hoping for outright victory No.23.

With 22 wins, the United States is the all-time leader in the Motocross of Nations. Great Britain is second with 16.