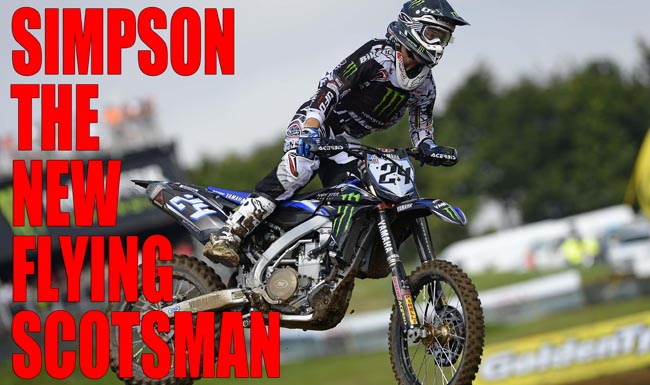 Shaun Simpson won the MX1 class at the weekend’s Dutch Grand Prix at Lierop, becoming the first Scotsman to win an MX1 Grand Prix since Billy Mackenzie did in Japan in 2007.

With the season now wrapped up, many of the GP riders now prepare to represent their respective countries at the Motocross of Nations in Germany in just three weeks’ time.

Yamaha’s Shaun Simpson was one of the main protagonists of the weekend and all the MXGP paddock was cheering for the British rider when he crossed the finish line as the winner of the Grand Prix.

Simpson rode two strong races and he admitted that today’s racing conditions were really favourable for him because he loves the sand and he does not mind riding with wet conditions as the ones today in Lierop. Simpson had really good starts in both heats, but while in the first one he rode with the front group most of the time and crossed the finish line second, in the final one he had to battle with Strijbos, Bobryshev, Desalle and in the last laps with De Dycker to finish third.

With this overall victory Shaun Simpson has become the last MX1 GP winner in the history – in 2014 it will be called MXGP – and he explained that he feels very proud for that, as well as also for being the first British rider on the first step of the MX1 podium after Billy Mackenzie’s victory back in 2007.

The second overall position of the Dutch Grand Prix was for Rockstar Energy Suzuki World’s Kevin Strijbos thanks to his 2-2 result. The Belgian rider was a bit disappointed today because his goal for the weekend was moving up to the fourth position of the championship, which he did, but also winning the Grand Prix and he finished just one point behind Simpson. He admitted that he could not find the good feeling with the track today, especially in the second moto, and this is why he could not keep a good rhythm to ride for the victory in both races.

Red Bull KTM Factory Racing’s Antonio Cairoli was also a bit disappointed with his third overall position, because he wanted to close the championship with an overall victory. The Italian dominated the second race from beginning to end, but in the first one a problem on his back wheel forced him to finish fourth. Cairoli admitted that he rode safe the first minutes of the first heat because he was not sure how his body would react riding the 450cc, but after twenty minutes he started feeling confident and he got a good rhythm to catch Simpson. However, the Italian had already felt that there was a strange noise on his back wheel, and he was about to overtake Simpson for the lead, he lost the back wheel and crashed. Cairoli had to slow down but he was still able to finish the race fourth.

Honda World Motocross’ Evgeny Bobryshev had two really good starts today and he did his best to finish on the podium, but in the end he ended fourth ahead of Ken De Dycker. The Russian rode very strong laps in the beginning of the first race, but he made several mistakes which made him move from first to fourth. However, in the last lap he managed to overtake Cairoli and he finished third. In the second race Bobryshev was determined to make a strong moto, but after an excellent start in third, he dropped down to the sixth place. With two laps to go the Russian overtook Desalle and crossed the finish line fifth.

Red Bull KTM Factory Racing’s Ken De Dycker was fifth and fourth in today’s races and he obtained the overall fifth position of the Grand Prix, but he received the bronze medal for his third position in the MX1 championship. De Dycker explained that in the first race he could not find the good lines and he rode very slow during the whole moto, so they decided to make some changes in the suspension of his KTM for the second race. The Belgian had a bad start in the final race and he stalled the bike twice in the first lap, but he gave it all and moved up to the second place. However, he started making a lot of mistakes like in the first heat and he dropped down to fourth.

Tommy Searle had a bad start in the first race, but he did an incredible recovery from his initial seventeenth place to finish seventh. In the second race he obtained a strong eighth position to finish sixth overall. Gautier Paulin and the British rider exchanged the seventh position of the second race several times, but it was finally the French rider who crossed the finish line seventh, but the French rider had been ninth in the first race, so he was seventh overall. Paulin explained that he did not want to take many risks today, as he is very close to be again at his 100% and he wants to do well at the Motocross of Nations in two weeks time.

Jeremy Van Horebeek was eighth overall and Clement Desalle was only able to finish ninth ahead of home rider Rick Satink.

Red Bull KTM Factory Racing’s Jeffrey Herlings received the FIM Gold Medal today in front of his home crowd and he was also able to go home with another overall victory after winning both heats.

The Dutch rider led the first race from beginning to end, but in the second one he crashed during the fifth lap and he dropped down one position. Herlings admitted that he hit his injured shoulder and he struggled a lot to recuperate his rhythm, but towards the end of the race he started feeling better and he succeed to overtake Glenn Coldenhoff and win the race.

Rockstar Bud Racing Kawasaki’s Dylan Ferrandis was back on the podium this weekend after finishing second and third in today’s races. The French rider had already had a good qualifying race in fourth yesterday and today he was focused in racing two consistent motos with no mistakes and he was very satisfied with his third overall position.

Red Bull KTM Factory Racing’s Jordi Tixier rode all the weekend with some pain on the wrist he injured in Matterley Basin two weeks ago and he admitted that he struggled holding his bike properly after the first twenty minutes of the races. In the first one he was able to ride a consistent race in third, but in the second one he had a big crash and twisted the wrist again. In the end Tixier crossed the finish line fourth and ended third in the Grand Prix.

Yamaha’s Petar Petrov was looking forward to racing the Dutch Grand Prix because he loves riding on the sand and he knew he had some possibilities to finish even on the podium. In the first race he had a bad start and he was down in the thirteenth position in the first lap, but he made an impressive recovery and crossed the finish line fourth. In the second race he rode fourth during the first few laps, but he could not stop Tixier to overtake him and he dropped down to fifth, which gave him the fourth overall position of the Grand Prix.

The fifth overall position was for KTM’s Romain Febvre thanks to his 6-7 result. It was a very difficult Grand Prix for the young French rider but he managed to ride two consistent motos and ended among the top five best MX2 riders, ahead of Australian Dean Ferris. Christophe Charlier and Alexandr Tonkov.

Home rider Glenn Coldenhoff was very disappointed with his ninth overall result, because he finished second in the second heat, but a mechanical problem forced him to retire from the first race. Jake Nicholls completed the top ten.

José Butrón had a very hard weekend and was only able to finish sixteenth overall, but he was very satisfied to finish third in the championship and become the most successful MX2 rider in Spain.