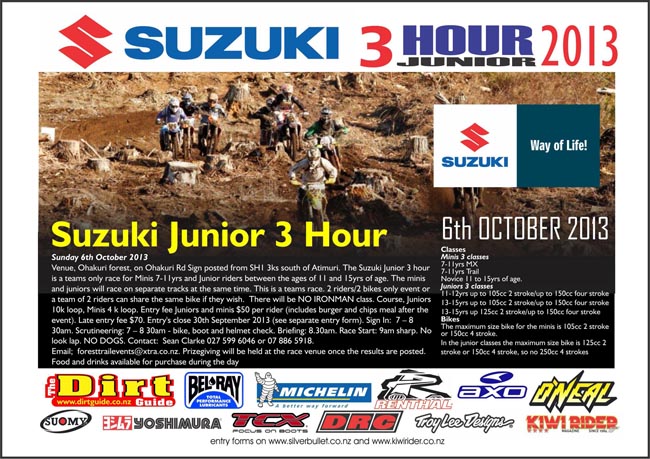 And Suzuki New Zealand has got on board to sponsor it.

Clarke got his start in off-road motorcycle sport early.  So early that he still carries the nick-name ‘Junior’ – even though he is now a veteran.  After an illustrious career he’s doing something for the new Juniors, hoping to attract more kids into cross-country racing.

On Sunday, October 6, the first proper endurance event for young off-road riders will be staged in the Ohakuri Forest south of Clarke’s home town, Tokoroa.

It is the kids-only Suzuki Junior Three-hour.

Clarke, with the support of the Dirt Guide and Kiwi Rider magazine, has been staging 90 minute cross-country races for junior and mini-bike riders for the past two years.

The winners in his Dirt Guide/Kiwi Rider backed series have all come from motocross backgrounds, and all are previous King of the North Mini Motocross winners:  Jake Wightman (Waimauku), James Scott (Operau)  and Dan White (Korakonui) to mention three.

“The kids really like the fact they are out in the forest and learning the track as the event progresses,” Clarke says.

“A lot of the time they are riding on their own, which helps hugely in building their confidence.  However, they are still kids so we will have several travelling marshals out on both courses to ensure all the riders have a good time.”

Yes, there will be two courses in the Suzuki Junior Three-Hour.  One will be a 10 kilometre course for Juniors aged 11 to 15-years-old; the other will be a Mini course over four kilometres for 7 to 11-year-olds.  The courses are designed to suit the small wheels of the bikes the kids will be racing and both classes will be racing at the same time.

The Suzuki Junior Three-Hour is a teams’ contest so none of the riders will be racing the full three hours.  They will either share a bike, with one rider handing over to the other at the re-fuelling stops, or run pony-express style, with the second rider on a fresh bike waiting for his team-mate to finish a lap before heading out.

In the Minis, the 7 to 11-year-old riders have choice between 0-105cc two-stroke motocross bikes, or four-stroke trail bikes up to 140cc.

The Junior teams will be:

There will be no class for 250 four-strokes.

Sign-in is at 7.00am with scrutineering starting at 7.00am as well (bike, boot and helmet check).