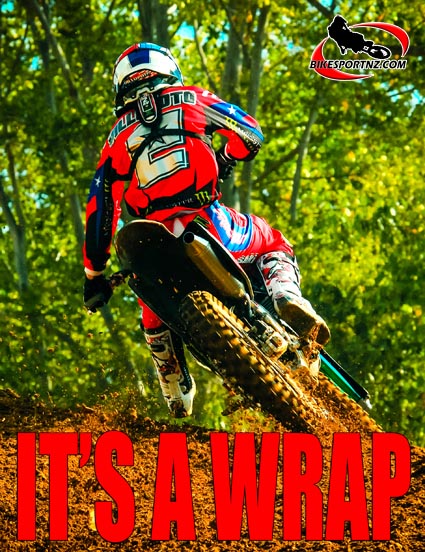 The 2013 United States Motocross Championships wrapped up its 12-round series on Saturday with the second running of the Red Bull Lake Elsinore National in Lake Elsinore, California.

With temperatures topping out at more than 40 degrees Celsius, Southern California’s season finale presented some of the most gruelling race conditions of the season.

After wrapping up the 450 class title at the previous round, Kawasaki’s Ryan Villopoto swept the final two motos of the season at Lake Elsinore Motorsports Park, capturing his eighth overall victory of the season.

Newly-crowned 250 class champion Eli Tomac (Honda) captured his seventh overall victory of the season with a moto score of 2-1.

Yamaha’s Josh Grant kicked off moto one of the 450 class in a big way, grabbing his fourth holeshot of the season. Grant was able to hold off Honda’s Justin Barcia and Villopoto to maintain the early lead. However, the recently-crowned 450 class champion wasted no time moving to the front as he made the pass on Grant to take over the lead by lap five.

KTM’s Ryan Dungey started off just inside the top five, quickly moving into the third-place position, where he set his sights on Grant for the second place position. With two laps to go, Dungey made the pass on Grant to take over second place where he finished nearly 30 seconds behind Villopoto in the first moto.

Villopoto continued his dominance in moto two, grabbing the early lead after getting around Yamaha’s Justin Brayton.

Dungey once again settled behind Villopoto in the second place position, with Barcia close in tow.

In moto two, a majority of the excitement came outside of the top three, including the race-long battle between Kawasaki’s Jake Weimer and Canadian Motocross Champion Brett Metcalfe. The duo started off just inside the top 10 where they pushed their way through the pack and inside the top five. Weimer eventually broke away from Metcalfe and finished fourth place in moto two, giving the Idaho native fourth overall for the day with a moto score of 8-4. Barcia maintained third place in the final moto of the season, ultimately securing third overall with a 5-3 moto score.

Villopoto maintained a comfortable lead over Dungey in the second moto, securing his 18th moto win of the season. Villopoto’s eighth overall victory of 2013 puts the two-time 450 class champion in a three-way tie for 10th place for all-time race wins with a total of 12 career wins in the premier class.

“With the great team that I have behind me, we were really able to turn the ship and go in the right direction with tuning the bike this season,” Villopoto said.

On his upcoming ankle surgery during the off-season, Villopoto said, “We’ll be back on the bike before you know it and we’ll be focused on the prep for supercross. We’ll go to the Monster Energy Cup to see where we’re at and what we need to work on and after that A1 [the first round] will be right around the corner.”

Dungey put forth a consistent 2-2 moto score, finishing second overall for the day.

“I would have liked it to be a little better but 2-2 was a good day. I was happier with the second moto even though the track was really rough, really choppy and tough. I’m just happy to be ending the season healthy,” Dungey said.

Heading into the final round, Tomac had an eight-race winning streak through the last four rounds but KTM’s Ken Roczen brought his streak to an end as the German claimed the moto one win in the 250 class.

It was Honda’s Zach Osborne who grabbed the holeshot in moto one and an onslaught of competition followed close behind. Roczen immediately grabbed the lead, with Yamaha’s Jeremy Martin, Tomac and team-mate Marvin Musquin close behind. Musquin made a mistake and dropped back early on, but Martin and Tomac kept pushing in an attempt to catch the leader.

However, Roczen didn’t break as he secured the moto one win ahead of Tomac and the rookie duo of Jeremy Martin and Cooper Webb, who finished third and fourth respectively in the first moto.

“I felt really good after the first moto. It’s a whole different feeling when you get the start and you’re up there,” Roczen said. “Overall I’m just glad that I’m healthy at the end of the season. I’m going to be on 450 next year so it’s going to be really different and I’m going to change some things to get better.”

In moto two, Osborne grabbed the holeshot once again but Kawasaki’s Blake Baggett claimed the early lead. Tomac put himself into the second place position early on but Baggett maintained a comfortable lead throughout the moto.

Yamaha’s Webb had a breakthrough ride in moto two, capturing a career-best third-place finish. However, the position didn’t come easy to the 250 class rookie as he battled with Osborne for a majority of the race. In the end, Webb was able to hold his position, with Osborne and Martin close behind.

“It was definitely gnarly today, the heat didn’t seem to bother me too much, I was just trying to put consistent laps on a pretty brutal track,” Webb said. “I’ve kind of struggled with the mental side this year and felt like the past two weeks I recharged my batteries and went in with a different outlook. I’m satisfied with the last race for sure and I couldn’t have ended it a better way.”

Despite a valiant charge by Tomac at the end of moto two, Baggett held strong to cross the finish line in the first place position. However, Tomac was awarded the first place finish in Moto 2 as a result of a penalty given to Baggett. Tomac claimed the final overall victory of the season with a 2-1 moto score.

“It was one of those days where it wasn’t my track and it wasn’t my day. I feel like it just wasn’t there for me today and there was no use in going out there and doing something stupid,” Tomac said. “It was overall a really good year. I wasn’t really expecting to win eight motos in a row like I did. It went really, really well.”

Roczen experienced a crash that knocked him back a few positions in moto two, finishing second overall for the day with a 1-7 moto score. Webb put in a career best overall performance, finishing third overall with a 4-3 moto score in his rookie season of 250 class competition.