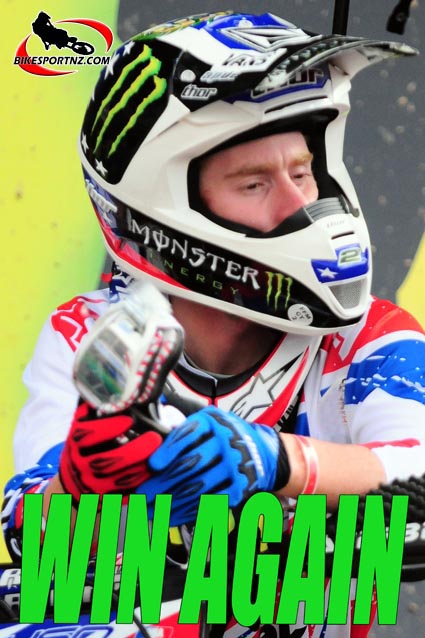 Series leaders Ryan Villopoto and Ken Roczen were victorious at RedBud at the weekend, round seven of the United States Motocross Championships.

Taking place over fourth of July weekend, a massive crowd was on hand to witness some of the most intense racing of the season at Buchanan’s Red Bull RedBud National in south-western Michigan.

Amongst some of the sports most decorated racers, Monster Energy Kawasaki’s Ryan Villopoto swept both motos in the 450 Class to capture his fourth overall victory of the season; further extending his points lead in the class. In the 250 Class, Red Bull KTM’s Ken Roczen maintained his points lead after capturing a 2-1 moto score en route to his second overall win this season.

With the 1-1 day, Villopoto extends his lead on KTM’s Ryan Dungey going into Washougal and ends the 2012 champ’s streak of two straight overall victories.

Suzuki’s James Stewart ended the day second overall, his best day of the season, and finds his way to the podium for the first time since Hangtown. It’s not fair to say “Bubba’s back” yet. but Bubba has been riding his best races of the season of late and should be a contender again at Washougal.

Dungey finished the day 11th after going DNF-3 and falling 30 additional points behind Villopoto at Redbud. Justin Barcia still sits third in points after going 9-4 on the day for 5th overall. Josh Grant grabbed the third spot on the podium for Joe Gibbs Racing, going 3-5 and having his best round of the season.

The Red Bull RedBud National couldn’t have gone better for Villopoto, and we will see if he can continue his dominance in two weeks at Washougal.

Germany’s Ken Roczen earned a much-needed win in the second 250cc moto at RedBud. After finishing second behind Colorado’s Eli Tomac in the first moto, the two swap places in moto two, and Roczen takes the overall win for the day. Both riders will leave the day with 47 points in the standings, and Roczen survives another round as the 250 class leader with five rounds left in the season.

Roczen got some much needed assistance early in the moto that helped lead to his victory. Tomac crashed into GEICO Honda team-mate Zach Osborne while the two were moving through the pack early on. The crash left Osborne in 5th and Tomac in 9th, but Tomac managed to make his way back through the field into 2nd place where he finished 7 seconds behind Roczen. Osborne held onto 5th place to the finish.

Jeremy Martin took the holeshot and finished 3rd to go 4-3 and earn the final spot on the overall podium. Frenchman Marvin Musquin was riding in second before crashing on a turn and getting passed by Tomac and Martin. Musquin finishes the day 4th overall with 3-4 results.

Jason Anderson came in 6th, followed by Justin Bogle. Kyle Cunningham finished 8th in front of team-mate Cooper Webb, who ends the day 7th overall. Blake Baggett squeezed his way into the top ten, finishing the day 8-10 for 9th overall. After a few strong rounds from Baggett, he can’t be happy with his performance at RedBud and should benefit from a week off before heading to Washougal.