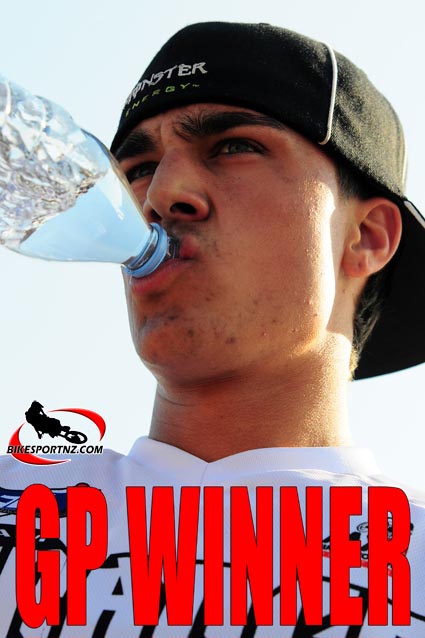 The spectacular Maggiora circuit hosted the Italian Motocross GP at the weekend, with more than 38,000 spectators cramming the hillsides.

The crowd was outstanding and they supported their home riders until the very last lap. However, Italian defending MX1 world champion Antonio Cairoli (KTM) finished third overall as French Kawasaki ace Gautier Paulin took the top step of the podium and his KTM team-mate Ken De Dycker finished second. In the MX2 class Jeffrey Herlings was first and José Butrón second, but it was Alessandro Lupino’s third place that made the crowd go crazy.

Before the MX1 and MX2 races started, the MX3 and WMX took part in their final races, and while Klemen Gercar obtained the overall victory after his 2-2 result, Chiara Fontanesi dominated both heats with great authority.

Kawasaki Racing Team rider Paulin obtained his third GP victory this weekend after finishing second in the first race behind Clement Desalle and winning the second heat from the likes of Cairoli. It was not an easy win for the French rider, but he managed to keep the lead until the finish line even having the home rider racing right behind his rear wheel during the last three laps. Paulin was visibly emotional on the podium and he admitted that such victory was the perfect reward for all the effort he puts for improving every Grand Prix.

The second overall position was for Red Bull KTM Factory Racing’s De Dycker whose last podium had been in the Italian track of Arco di Trento in April.

The Belgian rider felt really well on the track today and he managed to take two good starts and ride two consistent motos. De Dycker obtained a comfortable second position in the first race and in the second one he rode second during the first half of the heat, but he could not stop Cairoli to pass him.

Home rider Cairoli could not finish on the top of the podium this weekend but he was very proud of the crowd that packed Maggiora and cheered for him until the very last moment. The Red Bull KTM Factory Racing rider started leading the first race but he made a mistake, crashed and twisted the knee he had injured in 2008.

Suddenly Cairoli felt some pain, but after some laps he managed to recover the rhythm and moved up to third. However, he made another mistake and dropped two positions to finally finish fourth. Cairoli had to tape his knee to start the second race and he needed about 15 minutes to warm up his knee and be able to push. The Italian overtook his teammate De Dycker and he quickly gave charge to Paulin, but despite being really close to pass him, he had to settle down with the second position, which gave him the final third overall result.

Kawasaki Racing Team’s Jeremy Van Horebeek took another step forward in Maggiora, obtaining his best result of the season in fourth. The Belgian rider started fifth in both heats and he was able to ride two consistent motos until the finish line.

Honda World Motocross’ Max Nagl did not have a good jump off the gate in the first race but he managed to find a good rhythm and he moved from tenth to sixth. In the second race the German succeeded to start with the front group, but after a couple of laps he had a problem with his front wheel and he started dropping positions. In the end the Honda rider was able to finish sixth again which gave him the fifth overall position in the Grand Prix.

Suzuki’s Kevin Strijbos was fourth after the start of the first race and he moved up to third when Cairoli crashed in the second lap. However, the Belgian could not keep the rhythm and he finished seventh. In the second race Strijbos started down in 15th, but he made a great recovery and crossed the finish line seventh to finish sixth in the Grand Prix.

Britain’s Tommy Searle was expecting to finish among the top five, but two poor starts made him finish seventh overall, ahead of home rider Davide Guarneri and Xavier Boog.

Desalle started behind Cairoli in the first race and when the Italian crashed, the Suzuki rider took the lead and he kept it until the chequered flag. In the second race Desalle had a mechanical problem on his bike and he could not finish the race, so in the end he obtained a final 10th place.

Russian Evgeny Bobryshev was a bit disappointed with his 12th overall position, as he had really good feelings yesterday in the qualifying race. Bobryshev crashed a couple of times in the first race and he made a small mistake in the second one when he was riding close to the front group. In the end he crossed the finish line eleventh.

Scotsman Billy Mackenzie achieved his goal by finishing 15th after obtaining a 16-14 result.

Home rider Davide Philippaerts, who hit heavily his eye on Saturday in a crash during the qualifying race, decided to try to race the first moto, but an early crash made him decide to retire. Philippaerts was very disappointed for not having been able to obtain a good result in front of his crowd, especially after having raced second in the qualifying race.

Red Bull KTM Factory Racing’s Herlings started fourth in the first race and it was not until half way through the heat that the Dutch rider overtook Alexander Tonkov and gave charge to Butrón who was leading the race at that point. After one lap Herlings took the lead and kept it until the end of the race. In the second moto Herlings started behind Tonkov, but this time the red plate holder overtook him quickly and kept a good rhythm until the end.

KTM Silver Action’s Butrón felt really comfortable today in the Italian track, especially because he is used to high temperatures and hard pack tracks like the one in Maggiora. The Spanish rider missed the holeshot of the first race, but Tonkov made a mistake when he was leading and the Spanish rider took the lead.

However, Herlings was coming really fast from behind and Butrón dropped down to second; Tonkov passed the Spaniard back, but with two laps to go Butrón passed him back and crossed the finish line second. In the second race his start was not that good but he managed to obtain a consistent fifth place which gave him the overall second position.

Home rider Lupino was one of the protagonists of the Italian Grand Prix making the crowd go crazy in the second race. The Italian had finished sixth in the first race after a poor start, but in the second one he started third. The CLS MX2 Kawasaki Monster Energy Pro Circuit rider rode third most of the race, but with two laps to go he gave it all, managed to overtake Tonkov and he finished on the third step of the podium.

Red Bull KTM Factory Racing’s Jordi Tixier was really close to being back on the podium, but in the end he had to settle down with the fourth place just one point behind Lupino. In the first race Tixier started seventh and he struggled to find a good rhythm, but by the middle of the race he moved up to fifth and with two laps to go he overtook Christophe Charlier. In the second race he had a similar start, but after six laps he was already fourth; the French rider gave it all to overtake Lupino and Tonkov, but in the end he crossed the finish line fourth.

Wilvo Neestan JM Racing KTM’s Jake Nicholls obtained an overall fifth position thanks to his 3-8 result. In the first race he had a good start and he rode a consistent moto in fourth until the chequered flag. In the end the British rider was third because Tonkov was disqualified. In the second race Nicholls was ninth at the start and he was only able to finish eighth, but he was fifth of the Grand Prix.

Charlier started around the ninth position in both motos and his 5-6 result gave him the overall sixth place. Australian Dean Ferris was seventh and Petar Petrov and Glenn Coldenhoff were eighth and ninth respectively.

Tonkov, who won Saturday’s qualifying race, obtained the GET Athena Holeshot Award in the first heat and he also took the holeshot in the second race. However, he was a bit disappointed because he was only able to finish tenth overall even if he finished third in the second heat. The Russian was unclassified in the first race because he crashed in the final corner before the finish line.

Leading results from the Italian GP: