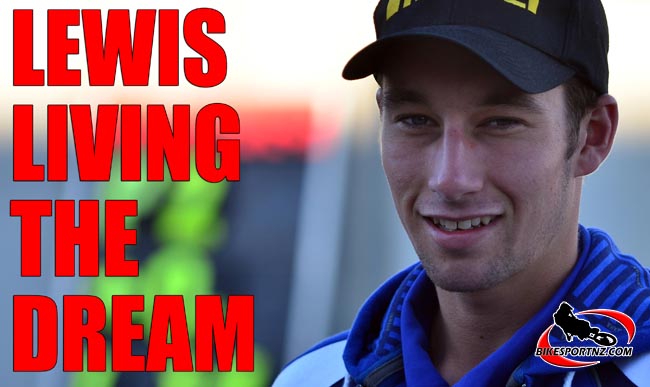 Rangiora’s Jake Lewis is ‘living the dream’, his impressive performances for Yamaha in domestic events at home over the past few seasons giving him the confidence to now tackle top-level road-racing in Europe.

Lewis raced a Yamaha R6 to finish third overall in the 600 supersport class at the 2013 New Zealand Superbike Championships, which wrapped up at Taupo in March, and then he immediately packed his bags to head to Europe to race in the European Junior Cup, a competition where all riders are on virtually identical Honda CBR500R bikes.

Now nearly halfway through his eight-round cup campaign – where he is currently second in the series standings – the 18-year-old Lewis reflects on what has been a fantastic season for him so far.

He won the opening round of the European Junior Cup in Spain in April but then disaster struck when he crashed out of the points at round two in the Netherlands. He rebounded to finish third at round three in Monza, it Italy, last month.

Lewis now braces himself for the fourth round of eight in the series at Imola, in Italy, on June 30.

“It has been a fantastic experience so far this year with a few ups and downs; the highs have been great with the win first up at Aragon in the EJC and adding a third to that at Monza which was something special. I have also managed to do a few track days with (New Zealand former international superbike star and GP winner) Simon Crafar, with the highlight being three days at Valencia, which was an awesome experience, getting to ride Simon’s GSX-R 750 flat-out around there for three days doesn’t get much better.

“Then I was able to put my leg over one of his new GSX-R 1000s for a session and that was just the best feeling, especially around Valencia.

“We have two more track days planed soon at Le Mans and Jerez, so I am really looking forward to a good six days on these great circuits.

“My opportunity of getting a wild card ride last weekend at Imola for team Tecnicamoto Honda was also another highlight and being able to run at the front of the 38 strong field was quite special.

“Thank you to both Andrea and Elena of Tecnicamoto Honda and Phil and Cheryl London of WIL Sport Management for making the weekend at Imola possible, it was a fantastic experience.

“I want to shout out a huge thank you to all my supporters who have been right behind me throughout my racing and to the very generous people who have helped make it possible for me to be in Europe this season.

“I would like to say a big thank you to Tony and Amos of Stadium Finance, Stadium Cars, RaceSupplies NZ , Budget MC Spares, Charlton Hurrell Drainage, John Palmer, Roger Townshend, Carol Whall, Merv Orford, Geoff Kelly, Dave Milligan, Motorcycling Canterbury and many of you in the MCC Family and Motorcycling New Zealand community for all your support, we have some great opportunities being discussed for next year already which is very exciting so I will be pushing very hard for top results for the remainder of the season to show I am worthy of a big opportunity in this tough sport for the future.”