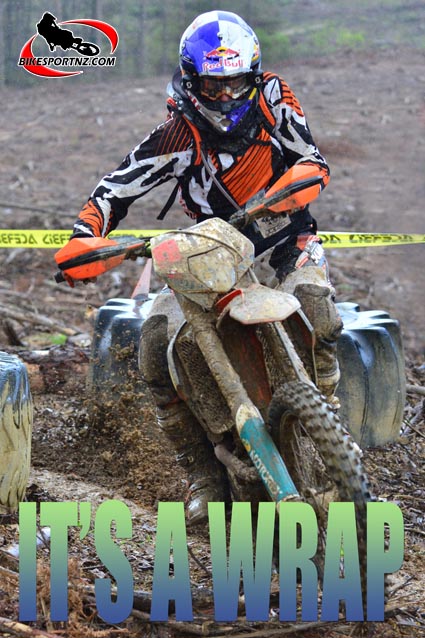 Glen Eden’s Chris Birch seems to be unbeatable this season – it is now five wins from five starts for the Kiwi international at this year’s Yamaha New Zealand Enduro Championships.

It was another scintillating performance from Aucklander Birch at the fifth round of seven in this year’s series, held in the Maramarua Forest, north-east of Huntly, on Saturday, as he won all but one of the eight ‘special tests’ on the slippery, tree root-infested ground.

Birch is now an unbeatable 37 points clear of defending national champion Adrian Smith, of Mokau, in the race for overall honours and it also meant he extended his lead in the Expert over-300cc four-stroke class to a massive 24 points over Tauranga’s Reece Burgess.

With riders to discard their one worst result, it means Birch has wrapped up the national title overall for 2013 with two rounds to spare. He can afford to skip the last two rounds and he will still win the championship outright.

Another rider to have already wrapped up his bike class win was Tokoroa’s Sean Clarke.

Clarke finished fifth overall result on Saturday and this was enough to give him the veterans’ class title for 2013.

Milford-Cottam and Titirangi’s Callan May are also now very well placed to take their class honours in the coming weeks.

Milford-Cottam’s runner-up finish on Saturday meant he has put himself 30 points in front of Hokianga’s Damon Nield in the hunt for under-200cc two-stroke class glory.

May finished fourth overall on Saturday and extended his lead in the under-300cc four-stroke class to an almost unbeatable 30 points over new No.2 man in the class, Northland’s Mitchell Nield.

Round six of the series is set for Taupo on July 20 with the final round scheduled near Tokoroa on September 21.

Leading overall results from round five of the Yamaha New Zealand Enduro Championships in the Maramarua Forest, near Huntly on Saturday: