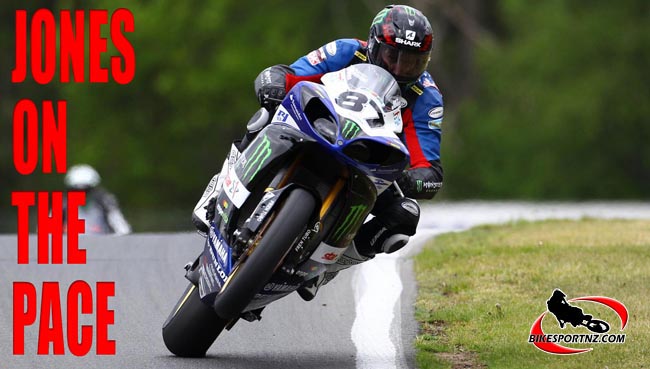 Two incredibly intense Superbike races featuring former New Zealand road-race champion Gareth Jones near the front was the highlight of round two of the IDM International German Superbike Championships at Zolder at the weekend.

As most of the IDM paddock tested at the circuit one week before the round, the pace from the first free practice session was hot with only tenths separating the front runners. However, the weather on Saturday and Sunday was to be the real test.

The two, 40-minute qualifying sessions on Saturday looked ominous and the rain was closing in. Australian Jones – New Zealand Battle of the Streets winner in 2008 and the New Zealand 600cc supersport champion in 2009 – opted to get out on the circuit immediately as the green light signalled the opening of pit lane.

It was a good decision as only two flying laps into the session the rain struck the track and ended any possibility of faster lap times.

Jones posted a time on his second lap good enough to place him third on the grid, less than 0.2 from pole position. A time that remained throughout the day due to the rain effected track. Jones’ first front-row start aboard the Yamaha YZF-R1.

Race day was also a mixed bag with the first race to be run under full wet conditions. Jones had never ridden the Yamaha in the wet before but quickly adapted to the machine, leading the first lap and remaining in a podium position for the entire race before stretching out a gap on 3rd place chasing the leader to the line.

Jones finished his third ever race on the Yamaha in second place, 2.3 seconds from the top step, building on an already confident feeling with the Yamaha and taking 20 valuable championship points.

Race two was looking like it was also going to be wet but the clouds cleared allowing enough sun to shine through to dry the track; even though the start was delayed for a considerable time as some patches of light drizzle made things complicated. Nevertheless, the Superbike field took to the grid shod with dry tyres.

Jones leapt from the start slotting into second place at turn 1 and immediately began to challenge for the lead of the race. The race pace was fast from the outset and Jones again kept his Yamaha in a podium place for the entire race, all the while swapping places within the top 3 positions.

By mid race Jones and the leader, German Markus Reiterberger, bridged a gap back to third and fought out the remainder of the race for the win. Jones tried to pass the defensive leader at every possible chance but eventually finished the race with another strong second position and taking away the most points from the weekend and moving into third in the Championship, only one point from second position, cementing Jones’ feeling on the bike and with the Monster Energy Yamaha team.

“I really enjoyed the racing this weekend and had a lot of fun,” said Jones afterwards.

“We had two really strong results in both wet and dry conditions which have allowed us to take away a lot of point. My team have worked really hard as always and given me a bike that I can race at the front and have a lot of confidence with. I am really looking forward to Oschersleben next month and continuing on what we have built on this round.

The Yamaha team with be on track at Oschersleben for round three on June 14-16.