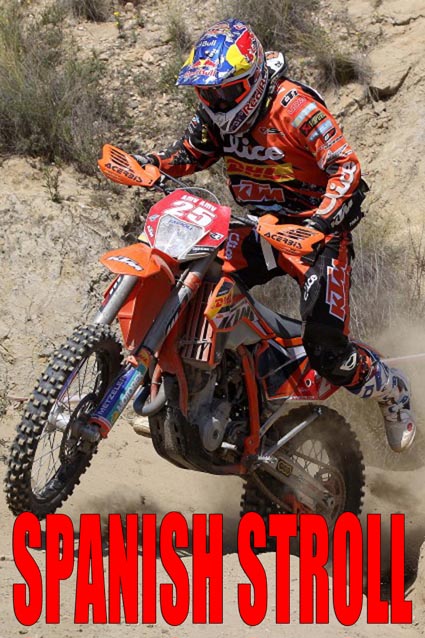 Spaniard Ivan Cervantes and French pair Antoine Meo and Christophe Nambotin took the wins at Puerto Lumbreras at weekend when the 2013 Enduro World Championship resumed in this southeast Spanish venue for rounds five and six of the GP of Spain.

Meo dominated the E1 class, while Cervantes (pictured here) celebrated his return to the KTM Factory Team with two wins in the highly competitive Enduro 2 class and Nambotin continued the form he found in 2012 to be the dominant rider in E3.

On Sunday, Meo re-established his dominance in the E1 class after a crash on Saturday saw him finish fifth. Although he reported some pain in his leg after Saturday’s crash, he showed no signs of discomfort on Sunday, winning four of the 12 tests and never finishing lower than second place.

It was also a good weekend for Cristobal Guerrero, of Spain, who started the season in the four rounds in South America still hampered by the after effects of shoulder surgery. He was fast enough on Saturday to take the third place and on Sunday finished a creditable fourth.

France’s Johnny Aubert also had a strong 3-4 result in the E2 over the hard, rocky and dusty terrain, even though he is often more at home on the grassy slopes of France.

But Cervantes was clearly in his element riding in the hot dusty terrain and got ample encouragement from the Spanish fans. On Saturday he won four tests and six on Sunday and now trails the class leader Alex Salvini by just nine points after six rounds.

After Saturday’s race Cervantes underlined that the E2 class is one of the most competitive in the current season. “After seven hours on the bike there are three or four riders within a few seconds of each other. That’s not only physically exhausting; it’s also mentally draining,” he said.

The normally omnipresent Meo was the unluckiest of the KTM factory riders on Saturday. He crashed hard in the opening Enduro test after colliding with a big stone going into a fast right hand corner.  The impact winded the French rider and the crash cost him valuable time and bent his handlebars but when Meo hit the track on Sunday there were no visible signs of this setback as he went on to dominate the class.

Spain’s Laia Sanz was also in good form after making the switch this year to a KTM. She secured a 1-1 result in the two opening rounds of the Women’s 2013 Championship.

Summing up the weekend, factory team boss Fabio Farioli said he was very happy with his riders.

“Cervantes had a great result this weekend, Antoine came strong on Sunday after his crash and Nambotin was very fast, especially on Sunday. It was a good result for Aubert to finish 3-4 in the competitive E2 class and it was a very strong performance from Guerrero. This was a very physical race and I didn’t expect him to be so competitive this quickly after his shoulder injury. This would have been a very tough race for him.”

The racing continues next weekend in Portugal with rounds 7 & 8.

E1 Standings after Round 6

E2 Standings after Round 6

E3 Standings after Round 6

EJ Standings after Round 6

Youth Cup Standings after Round 6

EW Results of Round 2

EW Standings after Round 2