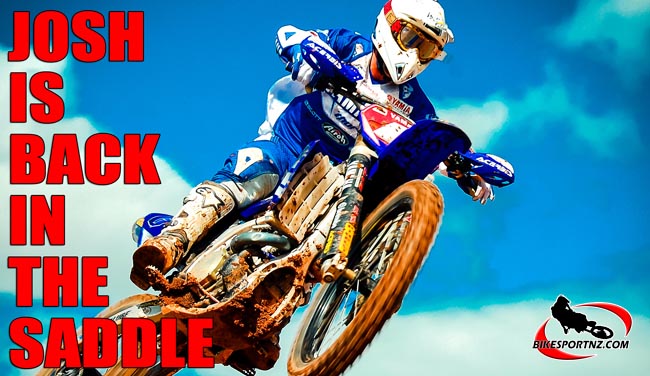 You can’t keep a good man down, or so the saying goes, and Motueka’s Josh Coppins is certainly a very good man indeed.

The 36-year-old former Kiwi motocross international retired from fulltime professional racing at the end of the 2012 season, just weeks after winning the Australian open class motocross title, and he immediately switched his attentions to mentoring some of New Zealand’s rising young stars, as well as managing the JCR Yamaha Racing team in New Zealand.

He tasted double instant success as a manager, with Queenstown’s Scotty Columb winning the national MX2 title at the New Zealand Motocross Championships when they wrapped up in Taupo in March and Rotorua’s Cameron Vaughan collecting the national 125cc crown.

Vaughan will step up to the MX2 class this weekend, while Coppins will again pull on his helmet to race MacKenzie’s MX1 bike at the popular race meeting.

“This is the biggest race in the South Island and I really wanted Yamaha to be represented there,” said Coppins.

“This was a big event for me when I was growing up,” said Coppins, the Michael Godfrey Memorial Motocross one of the events at which he honed his skills before heading off to tackle, and frequently beat, the world’s elite.

“This is definitely NOT a comeback,” he stressed, “but it does work in well with what I’ve been doing lately, testing bikes for Yamaha in Europe.

“Having been a professional athlete for so many years, I know that you get out what you put in, but I don’t expect to win this weekend.

“I have been very busy and so this has not been the best build-up for me to race again. I know Christchurch’s Justin McDonald and Rotorua’s Michael Phillips will be fast, but hopefully I will be competitive.”

Coppins won numerous national and international titles in a long and illustrious career that also saw him twice finish runner-up and twice third in the world motocross championships and there is no doubt riders and spectators alike will relish the opportunity to witness Coppins slicing his way through the Canterbury soil again this weekend.