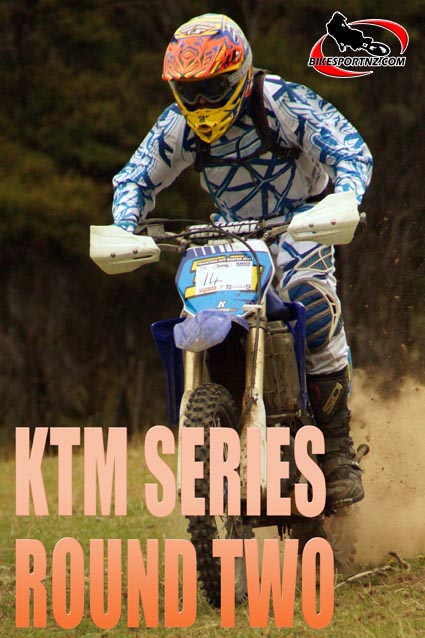 Round two of the KTM-sponsored South Island enduro series kicked off in the rocky hills of Alexandra at the weekend.

With dust normally playing a big factor in riding in the area, it was a big surprise to everyone to wake up to heavy rain in the morning.

Normally dusty trails were turned to mud as rain persisted to fall throughout the day.

Riders were treated to three hours of top quality single trail, with never so much as a minute of boring transport section to be had.

Five hours of riding had originally been planned for experts but due to the conditions on the day it had to be reduced to three hours, which was a rather relieving early finish for some competitors who struggled their way around the three muddy, rock-infested loops.

At the end of each loop riders completed a motocross style terrain test which consisted of a flowing natural motocross track with the odd rock thrown in for good measure.

The final terrain test of the day saw riders tackle the “cross” test which consisted of tight single trails, littered with rocks and mud which meant a moments lapse in concentration would see you on the ground.

This is where Hennessey put the icing on his proverbial cake, setting the fastest time by eight seconds from his closest rival to claim the overall win by seven seconds over round one winner Paterson, with local rider Forsyth coming in a very strong third, a mere one second adrift of Paterson

A big thanks has to go to KTM for sponsoring the series, Mark Macdonald for keeping the series running and Joe Forsyth for putting all the hard work in to make an awesome event in a stunning part of a country.

Round three is set for Mosgiel, near Dunedin in twoi weeks’ time, on May 19. Details on www.myrides.co.nz