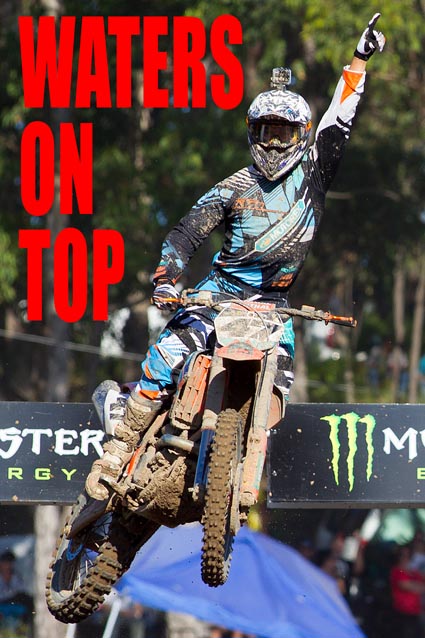 The North Queenslander qualified fastest, won the Go Pro Super Pole by more than a second with a scintillating lap of 1.59.623, then backed that up with victory in both motos to win the day from Suzuki’s New Zealand MX1 champion Cody Cooper, of Mount Maunganui, and Yamaha’s Billy Mackenzie, from Scotland.

Waters’ sensational form saw him win the first moto by more than 10 seconds from Jay Marmont (Kawasaki) and Cooper (Suzuki), then back that up in the second moto with an even bigger margin of over 18 seconds from Mackenzie (Yamaha) and Cooper.

For the first in-house KTM motocross outfit for three years, it was the perfect result with which to start the series, and sees Waters 10 points clear at the head of the MX1 table, although New Zealand’s Cooper could also be satisfied with his performance on Sunday.

Waters’ team-mate Kirk Gibbs had his MX Nats premier class debut hindered by the effects of a shoulder injury suffered a fortnight ago in New Zealand, the South Australian battling hard all day for 13th and 11th places which team manager Rob Twyerould assures is nowhere near Gibbs’ potential when injury free.

“A really great day for us today,” said Twyerould. “Todd was just incredible. His fitness was great, as was his race craft – he found lines no-one else got onto. He was only fifth each time out of the gate but by the first or second lap he’d be leading. Our pre-season trip to New Zealand really made him sharp, but now he’s just gone to another level. 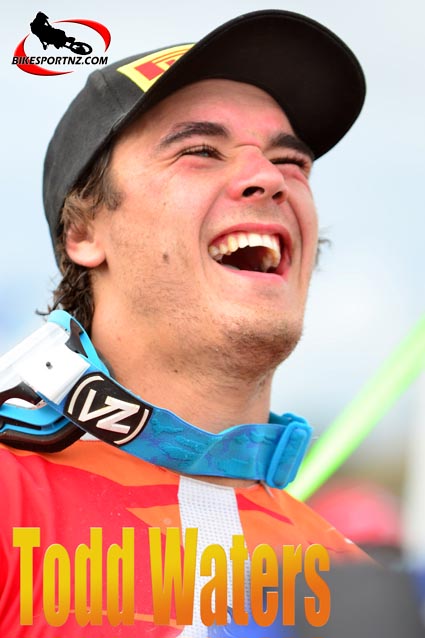 “Unfortunately for Kirk the shoulder injury and not being able to ride for two weeks made it tough for him with the weakness and pain in his shoulder and he seemed to ride a bit tentatively. But his potential is much greater than we saw today and with the next round being at his home track in South Australia I think that will be a big thing for him.

“All up I’m very happy. All the guys have done an incredible job.”

“It was a pretty good day for us, we did exactly what we came to do and I’m very happy for the team,” said Waters.

“For me, I’m here to get a good job done and build on the way I ride so I can be a better rider when I get to Europe and from that point of view it was a perfect start. I only got mediocre starts today but I was able to get through quickly and start to make a gap and ride my own race. It was a really tough track to race on; very slick and hard packed and one-line which made it really tough to pass on, so it was good that I was able to.

“I really loved my new bike too. It’s exactly what I wanted to ride – it’s an animal. I’m excited about going to Murray Bridge. I’m not known as a hard-pack rider so it was good to win here, but Murray Bridge is one of my favourite tracks so I’m looking forward to it.”

The rookies of the distributor-backed MX2 team Choice Motorsports KTM had an up and down day at the office, with 2012 MXD champ Kayne Lamont 6th and 10th across two motos for 8th on the day, while team-mate Dylan Long battled to 14th in Race One before a freak DNF in Race Two when he drowned the bike in a puddle, for 22nd on the day.

The next round of the Monster Energy MX Nationals takes place at Murray Bridge, SA on April 28.