The Kiwi invasion of Australia is about to kick off.

The Australian Motocross Championships kick off at Raymond Terrace in New South Wales on Sunday with New Zealand MX1 champion Cody Cooper and MX2 No.3 Rhys Carter set to lead the Kiwi attack.

Cooper, riding for the Pirelli Motul Suzuki squad, finished third in the MX1 (pro open) class last year but will be looking to step up and make sure the title stays in Kiwi hands after Motueka’s Josh Coppins won it last year for Yamaha, just before retiring.

New Zealand 125cc No.2 Logan Blackburn, of Te Puke, will also be giving the Aussies a crack this season, the BikesportNZ.com rider hoping to keep the MXD national development title in Kiwi hands after Mangakino’s Kayne Lamont won the title last season. Expect to see Takaka’s former New Zealand junior motocross champion Hamish Harwood to also be in the mix in the MXD class this year.

Kiwi race fans should also look out for BikesportNZ.com rider Lamont to make an impact in the MX2 class in Australia this season.

Lamont already has an Australian title to his credit but it’s a big step up now to the MX2 category.

The BikesportNZ.com-supported rider is a key member of the distributor-backed Choice Motorsports KTM MX2 team, managed by Anthony Giles.

Rookies to the class they may be, but the pair is far from an inexperienced one, since Lamont and Long finished as No.1 and No.2 respectively in the MXD national development class last season.

“Jeff Leisk (The KTM Australia general manager) was watching the boys last year,” said Giles, “and said to me ‘we should give them a shot in seniors,’ and here we are. I think it will be natural for the boys to struggle with the fitness demands of the longer motos, but for speed I think they’ll be in there.

“They’re actually a lot of fun to work with, fierce rivals on the track but they respect each other off it and have a good relationship. It’s very satisfying for myself and the team to be involved with them.” 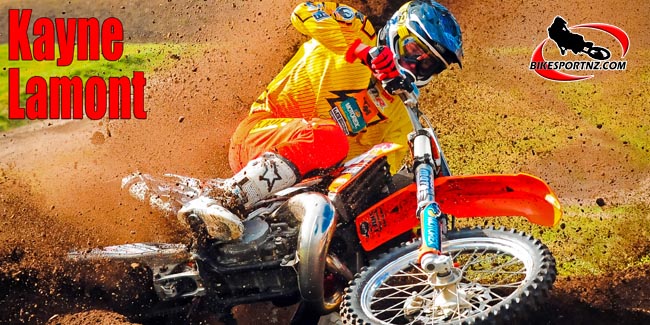