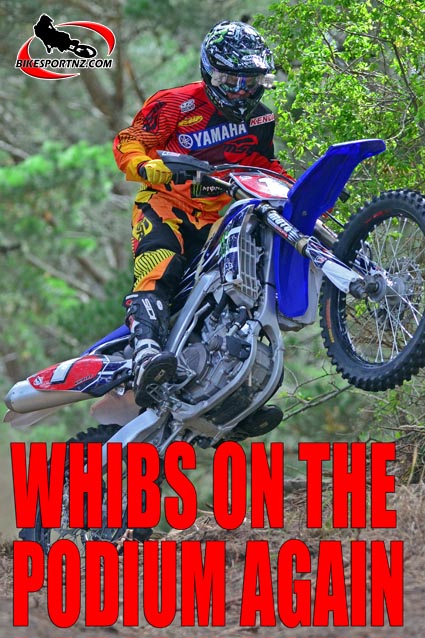 Pahiatua’s Paul Whibley was once again on the podium in the United States this week, this time at round two of the Off-Road Motorcycle and ATV Championships in Kentucky.

The 34-year-old former Manawatu forestry worker, affectionately dubbed “The Axeman” on the motorcycling scene, won two major cross-country titles in the US last season, clinching the Grand National Cross-country Championships (GNCC) and the Off-Road Motorcycle and ATV (OMA) crown as well and his 2013 campaign to defend both titles is just starting to gain momentum.

“A crash during the week had me in doubt if I was even going to be able to race this event,” said Whibley. “I hit a tree pretty hard and injured my hand. Darrell, my mechanic, fitted a Rekluse EXP auto clutch to the bike before we left and Danny from Rekluse did some fine tuning at the track, and it really helped me gain a good result.

“This race would be a bit of a survival race, not just for me but everyone else as well, with a lot of rain falling overnight.

“I got an ok start and went into the woods in about fourth place. I was not pushing too hard as it was difficult to hang on. My game plan was just to survive and get some points. I was able to follow the leaders and moved up to third when Kailub Russell got wedged in a rut.

“Mid lap we came to a creek crossing that looked pretty deep and soft. Russell Bobbitt got through, then Nick Fahringer and myself got stuck trying to climb out the steep bank on the far side. He lifted his bike up the bank. With my injured paw I wasn’t able to do the same. Kailub jumped in and got stuck beside me too. Fortunately, Bill Gusse was on hand and pulled Kailub and myself up the bank.

“Kailub took off after the leaders; I was back to fourth place until just after the start of the second lap when I passed Kailub, who was stuck in a rut again. The creek crossing was removed from the course and I held third place for most of the lap until I got some barbed wire wrapped around my wheel. Kailub dropped me back a position while I unwound the wire. Just after I started the next lap I cruised past Kailub again, stuck in a rut. It was turning into a bit of a hare and a tortoise battle between us.

“Eventually I managed to stay in front of him and settled into third place. To land on the podium when I was unsure if I was even going to be able to finish was a pretty good result.”