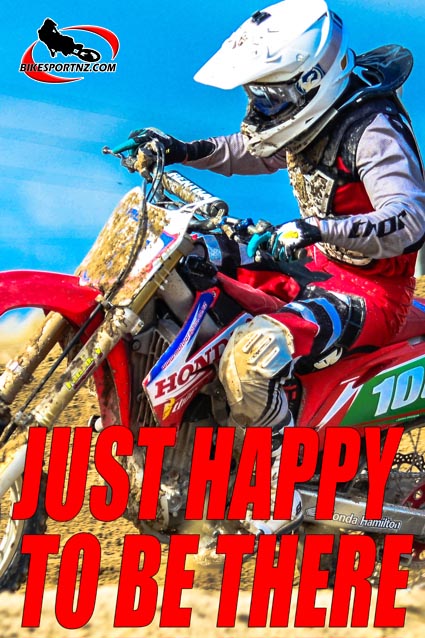 After a mad dash and an exhausting flight to get there, Rotorua’s John Phillips was relieved to make it back to Europe.

It is tough racing on the other side of the world, so far from the comforts and familiarities of home, but Phillips has done this before and he again had plenty of support from expatriate Kiwi Rex Michau, a man who has been based in England and running his successful business and motocross team from there for many years.

Phillips left New Zealand on a high, having won the final MX2 race of the New Zealand Motocross Championships series at Taupo over the Easter Weekend, but he was heading to a very different climate and true world class competition.

The Kiwi motocross rider’s experiences over the past couple of weeks certainly make interesting reading.

“My mechanic Cam Janes and I jumped on a plane on Thursday, April 4, having only booked our tickets the day before,” said Phillips.

“We got into Amsterdam on Friday and made our way to round one of the Belgian Championship on Saturday afternoon. It was held in Mons, a town close to the French border (no one spoke English). We slept in the van and called it in pretty early as we were still in New Zealand time.

“That night we froze. Cam was head-to-toe in thermals and I had a whole stack of blankets. We later found that it got down to -5 degrees!

“In the morning we met up with our Dirtbike-Gym Motocross Team boss/manager Rex Michau who had driven through the night from England, he had all the bikes and gear.

“Signing in was an experience, Rex had to be called in to convince the officials just to let me ride, and even then I didn’t get to ride my class and had to go into the MX1 class with the likes of Evgeny Bobryshev, Ken De Dycker, Shaun Simpson, Ken Strijbos and a couple other GP riders

“I had to do my best to get the feel of the bike in practice, it was my first ride on the bike and I had to deal with not having a cut down sub-frame as I am used to. I also had to put down a qualifying time. I struggled to learn the sand track and qualified 18th.

“We made a few changes to the bike after practice. I came out with a good start in the qualifying race, even though I was up against 450s. I charged hard the first couple laps and was sitting around seventh before I got tired and dropped back to 12th where I finished the race. I came in coughing and spluttering, unsure If I could even finish the day. I just wanted to get to sleep!

“With this being my first race over here I knew I had to grit my teeth and dig deep. Rex, Cam and I had already put so much into getting here. I got away to a similar start to the qualifying race and was running in ninth for a bit before I clipped a bank and went down, I dropped back to 14th were I finished the race feeling really unwell again.

“I had a sleep before the last moto, then Cam loaded me up with our last pack of natural confectionaries lollies we brought for the plane trip from NZ. My start was less than ideal but I pushed really hard, I found myself in seventh after the first couple of laps and had a good grove on with a few sharp lines.

“I slipped back a few spots throughout the race to finish in 10th. I was pretty happy with that race, but I had to dig really deep to hold the position.

“Cam and I have spent the past week and a half testing and doing motos in the sand, I feel I’m getting faster and faster. We are getting the bike going pretty good as well.

“A big thank you to Rex, for getting me over, and also to my mechanic Cam, for coming all this way with me. And thanks to mum and the rest of the family for all their help from back home.”