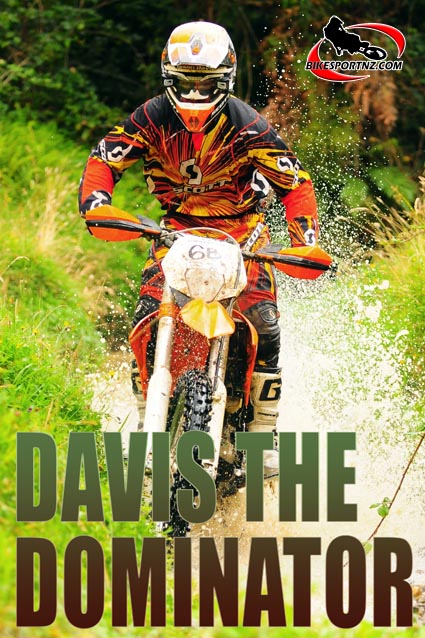 The 2013 Dirt Guide cross-country series kicked off at the weekend with former national enduro champion Jason Davis enjoying victory on the course set out at Ohakuri, on forestry land about midway between Tokoroa and Taupo.

More than 140 riders took part in the three races on the day.

In the junior race, which ran at the same time but on a different course, was won by Auckland’s  Jake Wightman followed closely by James Scott and Ben Hislop.

Wightman and Scott were the only riders to complete seven laps, finishing a full lap ahead of everyone else.

In the senior race, Whangamata’s Davis (pictured here) battled with Auckland’s Chris Power early on, but pulled away near the end to win by just over a minute with Tauranga’s Reece Burgess a further two minutes back.

“I had a shocking start but still managed to get through the traffic,” said Davis, a 24-year-old forestry worker.

“Chris Power and the other riders were a wee way behind me and I just backed off near the end. This was really just a training ride for me because I’ve been out of action for a bit, feeling a bit crook, so I wasn’t at my best.”

The first 10 riders in the experts grade managed to complete five laps of the 17-kilometre course in just over two hours.

In the senior intermediate grade, Luke Fisher, from Carterton, stole the win from two local riders Ryan Scherer, of Putaruru,  and Duncan McLaren, of Bennydale.

The race was held in perfect conditions with a bit overnight rain taking care of the dust.

Round two is set for Tar Hill, just south of Tokoroa, on May 18, with the third and final round back at Ohakuri on June 15.