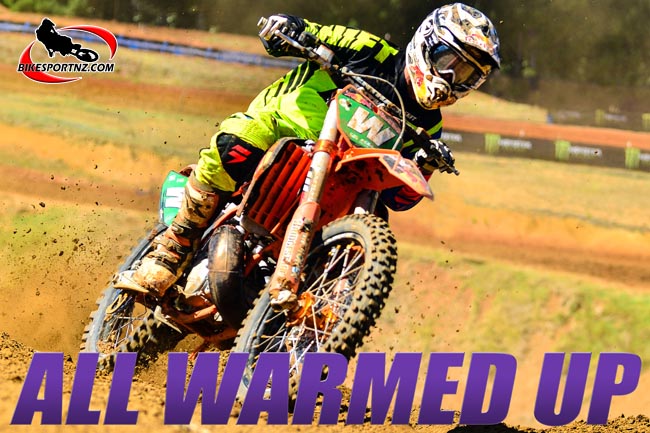 Australia’s Brock Winston has plenty of reason to smile these days … he only had plans for a ‘warm-up’ ride but he has since proven he was already very hot indeed.

The 25-year-old Gold Coast rider took his CMR Red Bull KTM 250SX to score another swag of points at the weekend, this time at the third round of four in the New Zealand Motocross Championships, near Pukekohe, on Sunday, and he has moved himself marginally closer to clinching up the national MX2 title on debut in this country, although he still has a lot of work to do and time is rapidly running out.

But Winston’s entire campaign was very much unexpected and he’s just happy to have been able to impress.

The likeable Queenslander was called in to fill a void in the CMR Red Bull KTM race team when team regular Kayne Lamont, of Mangakino, crashed and was injured during pre-season practice.

So it was a last-minute decision for Winston to race in New Zealand and he had no expectations of how he might fare, particularly since he’d never raced against most of the Kiwis and had no experience for the New Zealand terrain.

He surprised everyone when he finished on the podium at round one near Timaru last month and then repeated the dose with another solid performance at round two near Morrinsville just a fortnight ago … although now he claims he might be the victim of his own success.

“I’m really just using this opportunity as a chance to build up for the Australian nationals (which kick off in April), and so I wasn’t really too focussed on winning a New Zealand title. But, since I found myself second in the championship standings and I suddenly had a sniff of the title, I started to eye that up.

“I qualified fastest in the MX2 class on Sunday and was looking for another solid performance. I think maybe I focussed too much on winning races here, rather than just getting warmed up for Australia, and I crashed in turn one in the first race (at Pukekohe).”

He battled through the field to eventually settle for sixth spot.

“Then, in the day’s second race, I was slammed into the crowd by another rider and again I had to fight back.”

This time he finished fourth.

Winston was leading the third and final MX2 race of the day when he and series leader Scotty Columb (JCR Yamaha Racing YZ250F), of Queenstown, collided in a corner on the last lap, dropping the Australian back to third place.

“I got hit a few times today,” shrugged Winston afterwards. “But that’s racing I guess.

“In the end, I didn’t lose any ground on Columb and I actually clawed two points closer to him overall.”

It comes down to the final round now, set for Taupo in just over two weeks’ time (on March 31), to decide where the New Zealand MX2 title winds up.

As it stands, Columb is in a very strong position – he is a commanding 14 points clear of Winston, with the third-ranked rider, Mount Maunganui’s Rhys Carter (Moto City Suzuki RM-Z250) a further 13 points adrift.

Fellow Australian KTM riders Todd Waters and Kirk Gibbs have also impressed during their respective debut appearances across the Tasman.

The Kiwi campaign is also to give these Motorex KTM team-mates a head-start on their own domestic series back home, although Waters also has his eye on possibly competing at world championship level later in the year.