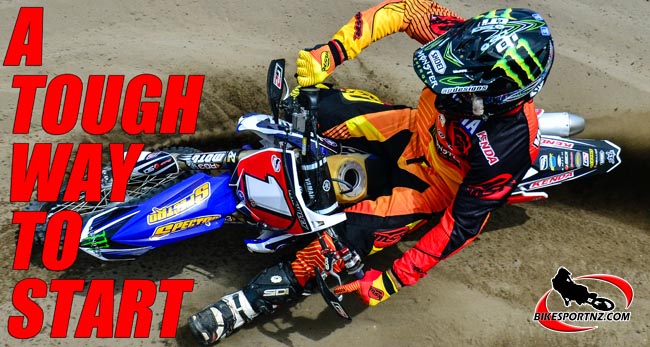 They say defending a title might be even harder than winning it in the first place … and that might just be the case for New Zealand’s Paul Whibley in the United States this season.

The man from Pahiatua enjoyed an international season of racing last year that was nothing short of sensational, and he knows that it will be a very hard act to follow in 2013.

Whibley’s GNCC title defence got off to a solid start this week, although fourth overall at the first race of the series in Florida was not what the 2012 champion really wanted.

Although 2011 GNCC champion Charlie Mullins got the sought-after win, it wasn’t easy for the American, with his team-mate Kailub Russell, Australia’s 2010 GNCC champion Josh Strang and Whibley hounding him all the way throughout the gruelling three-hour race.

Whibley (Yamaha YZ450F) snatched the holeshot, but he quickly found himself battling Strang at the start.

Mullins took over the lead by lap two after Whibley was forced to stop and pull a stick out of his rear wheel. This bit of bad luck also allowed Russell, Strang and American Chris Bach to fly past as well.

Whibley was then locked in a four-way battle for the front spots.

The Kiwi hero was able to catch Mullins and Russell, although he eventually fell back after stopping to fuel on the next lap.

“I lost touch with Charlie, Kailub and the other guys when I stopped for gas and I sort of ended up riding by myself after that,” said Whibley. “That’s when it’s hard to find the right push and make up time on those guys.”

Making his return to the GNCC series after nearly an entire season away, Strang found his pace midway through the race, eventually passing Whibley for the final podium position.

The Wellington rider finished 221st overall, completing only two of the six laps, but was still credited with 16th overall in the Pro XC1 class.

There are 12 races to go in the GNCC series and Whibley has no reason to panic. His title defence plans are still well on track.