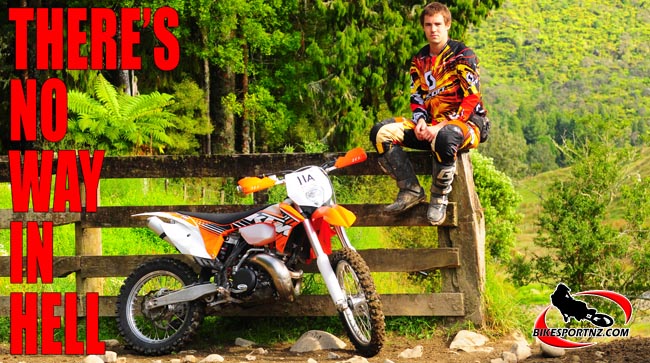 If competitors are saving their best for last, then now is the time to sharpen up because the No Way In Hell extreme enduro is aptly named.

This weekend’s No Way In Hell event is both a stand-alone event and the fourth and final round of the inaugural KTM Extreme Enduro Series and it is set for brutal terrain in the Hauturu Valley, near Oparau, inland from Kawhia, this Easter Weekend.

Auckland enduro ace Mike Skinner (KTM) won the opening round of the series in the Riverhead Forest, near Auckland, in November and then Wellington moto trials legend Jake Whitaker rode a Husaberg to win round two at the Tokoroa Enduro-cross in December.

Another moto trials legend, multi-time former national champion Warren Laugesen, of Hawke’s Bay, won the third round of the series in Te Puke a month ago, but it is perhaps Skinner and Whitaker who are the favourites to wrap up the Pro class at the two-day No Way In Hell final round this Saturday and Sunday.

Just four points separate these two men as they head to Oparau.

The 16-year-old Draper has already wrapped up the Experts’ class. With three wins from three starts, he can’t be beaten, so he will step up to the Pro ranks this weekend.

With the best three results counting for the series, it is a three-way battle in the Clubmen’s class with Auckland pair Luke Mobberly and Tom Brian and Cambridge’s Taylor Grey all in with a chance of winning the series.

While the four events that make up the series remain as stand-alone events, Clarke offers a special prize to the one outright series winner in each bike class.

“All the No.1 riders from all the motorcycling codes have come together for this,” said Clarke.

He said the format for this year’s No Way In Hell event has been changed from three laps to one big loop of about 90 kilometres in length.

The event kicks off with the Prologue at 2pm on Saturday, March 30, with the main event to start at 9am the following day.

Once again the No Way In Hell Extreme Enduro will act as a fundraiser for the local Hauturu School.

Entries are still open for the event and entry forms can be downloaded at www.silver-bullet.co.nz

Competitors can contact Clarke at foresttrailevents@xtra.co.nz or by phoning 027-5996046.