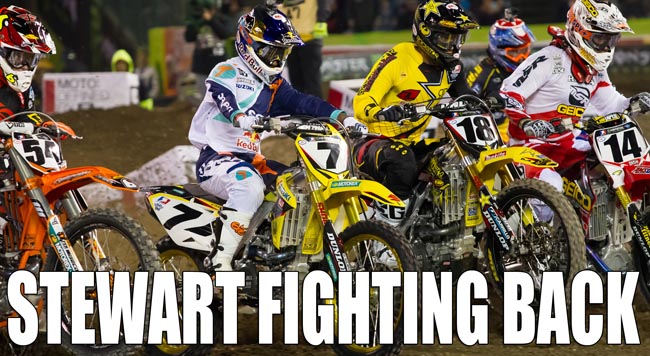 Suzuki’s James Stewart has revealed the extent of his injury and it’s more serious than first thought.

He has confirmed that he has a torn ACL, the injury suffered at the end of qualifying at the opening round of the 2013 United States Supercross Championship at Anaheim, in California, one nearly two weeks ago.

The Yoshimura factory Suzuki rider completed both the Anaheim I Supercross and last weekend’s Phoenix supercross main events, though his results were less than he had hoped for.

After seeking medical advice this week, Stewart said he was confident that would be able to put in an improved performance at round three at Anaheim II this weekend.

“This week I saw some good doctors, got some good shots and I feel a lot better,” Stewart said.

“It’s more so just when you know you’re hurt, then you ride different. I have been riding kind of timid, so I have just got to let that go,” he said.

Stewart has been unable to ride mid-week for the past couple of rounds. But, for the first time since the season started, he was able to get in some mid week motos in the lead-up to Anaheim II.

“I feel good this weekend and I’ve had a chance to ride this week, so going into A2 things should be different,” Stewart said.

“I actually rode twice this week so that was nice, like I said before I think this weekend should be different for me. I am feeling good to go racing,” he said.